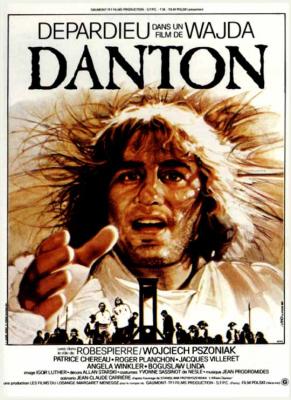 Andrzej Wajda’s “Danton” (1983) used the French Revolution as a metaphor for events then taking place in communist Poland, as the “Solidarity” trade union/social movement was trying to stand up in the face of suppression by Jaruzelski’s government.

“‘Danton’ was produced on commission from Gaumont, and originally was to be produced in Poland. The imposition of martial law on the 13th of December [1981], and the ban on gatherings of more than three people, made production in our country impossible. However, owing to Margaret Menegoz’s enormous efforts, we were able to transfer the whole project to Paris, taking with us some of the Polish actors and a small group of co-workers.

“…Before we began filming in Paris, while “Solidarity” was still functioning in Poland, Gérard Depardieu came to Warsaw for one day to see the revolution, and especially, to see its leaders at the moment just before the collapse of their undertaking.

“I wanted Depardieu to see the face of Revolution – inhumanly tired, with eyes wide open, suddenly falling asleep and never fully sleeping. Depardieu, guided by Krystyna Zachwatowicz, stood for a long moment in the hall of the Mazowsze Region headquarters with its endlessly milling crowds, where the history of those days was being created… No words and no director could have made a better job of introducing Gérard to the subject of my new film Danton than the scene which he saw with his own eyes.” (www.wajda.pl)

During this period, the media were placed under military management, and thousands of journalists (especially Solidarity sympathizers) were banned from practicing their profession. Hence the several allusions in “Danton” to suppression of free press. (“Martial Law in Poland”: Wikipedia)

Sorry for the faded quality of these clips. They come from a long-ago television broadcast, which omitted some of the more gruesome shots.

(Incidentally, “Danton” is available on DVD, & much better quality.)

ABOUT ANDRZEJ WAJDA:
Wajda’s recent film “Katyn” (2007) recounts the massacre of the Polish officer corp in Katyn Forest by Stalin’s order in 1940.