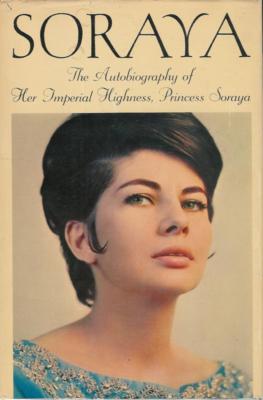 Princess Soraya’s Autobiography was first published in 1964 and re edited under a new title Le Palais des Solitudes aka Palace of Solitude in 1992. This one displays a Beautiful photo of her on the cover. (circa 1964)

“SORAYA”, Queen of Iran, the autobiography of her Imperial Highness, translated from German by Constantine Fitzgibbon. extremely rare, hard to find, out of print, first edition, first printing, collectible, 1964.

Description: The love affairs that shaped history, the girl of his dreams, a dazzling wedding, Golestan palace and the riches of Persia, a painful decision for want of an heir…. divorce and separate ways. The green-eyed Soraya, an Ava Gardner lookalike, was introduced to the recently divorced Shah in Paris in 1948 by Forough Zafar Bakhtiari, a relative, when she was still a student at a Swiss finishing school. Soon engaged (the Shah gave her a 22.37-carat diamond engagement ring), she married him at Golestan Palace in Tehran on February 12 1951; originally, the couple has planned to wed on 27th December 1950 but the ceremony had to be postponed due to the bride being ill. Though the Shah announced that guests should donate money to a special charity for the Iranian poor, among the wedding gifts was a mink coat and a desk set with black diamonds sent by Joseph Stalin a Steuben glass Bowl of Legends designed by Sidney Waugh and sent by U.S. President and Mrs. Truman, and silver Georgian candlesticks from King George VI and Queen Elizabeth , and the 2,000 guests included Aga Khan III The ceremony was decorated with 1.5 tons of orchids, tulips, and carnations, sent by plane from the Netherlands, and entertainment included an equestrian circus sent from Rome The bride wore a silver lamé gown studded with pearls and trimmed with marabou feathers, designed for the occasion by Christian Dior. She also wore a full-length female white-mink cape. Infertility and divorce. Though the wedding took place during a heavy snow, deemed a good omen, the imperial couple’s marriage had disintegrated by early 1958 over Soraya’s apparent infertility, for which she had sought treatment in Switzerland and France, and the Shah’s suggestion that he take a second wife in order to produce an heir. She left Iran in February and eventually went to her parents’ home in Cologne, Germany, where the Shah sent his wife’s uncle Senator Sardar Assad Bakhtiari in early March 1958, in a failed attempt to convince her to return to Iran. On 10 March, a council of advisors met with the Shah to discuss the situation of the troubled marriage and the lack of an a heir. Four days later, it was announced that the imperial couple would divorce. It was, the 25-year-old queen said, “a sacrifice of my own happiness.” She later told reporters that her husband had no choice but to divorce her.He was very sad about it. On 21 March 1958, the Iranian New Year’s Day, a weeping Shah announced his divorce to the Iranian people in a speech that was broadcast on radio and television and said that he would not remarry in haste. The headline-making divorce inspired French songwriter Françoise Mallet Jorris to write a hit pop song, “Je veux pleurer comme Soraya” (I Want to Cry Like Soraya). The marriage was officially ended on April 6 1958, extensive negotiations had preceded the divorce in order to convince Queen Soraya to allow her husband to take a second wife, as was allowed by his Muslim faith. The Queen, however, citing what she called her European principles regarding the sanctity of marriage, stated that “she could not accept the idea of sharing her husband’s love with another woman.” In a statement issued to the Iranian people from her parents’ home in Germany, Soraya said, “Since His Imperial Majesty Riza Shah Pahlevi has deemed it necessary that a successor to the throne must be of direct descent in the male line from generation to generation to generation, I will with my deepest regret in the interest of the future of the State and of the welfare of the people in accordance with the desire of His Majesty the Emperor sacrifice my own happiness, and I will declare my consent to a separation from His Imperial Majesty.”