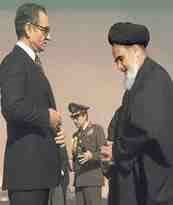 I believe most Iranians thouhgt that they could change the regime through the regime, but now that Ahmedinejad won by cheating, the Iranian people (Both secular and Islamic repub supporting bazaris (market owners and businessmen) ) have firgured out and realized finally, that the veiws of most of the Iranian population can’t be expressed or taken into action as long as this regime is in power. This led to riots and revolt, which will end the regime for good, I believe in the comming years, months or even weeks.

This election has made the Iranian people finally take serious action.