Letter to Director of Interest Section in Washington DC 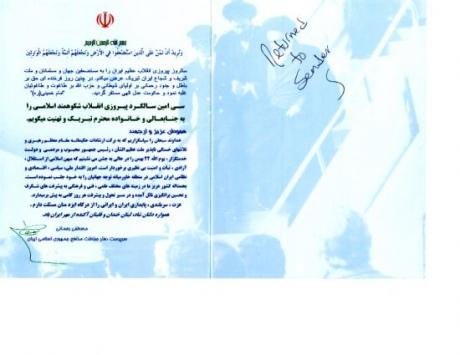 I am in receipt of your greeting card for the commemoration of the 30th anniversary of the upheaval in Persia. I thank you for the time and effort you and your staff have taken in designing, printing and mass mailing the card, but am afraid to have to return it to you for the following reasons.

Thirty years ago, when I was a mere teenager and had just come of age in time to be able to vote and determine the future standing of my beloved Persia in the world politics, had decided that the future of my country could not best be served by a theological dictatorship, hence voted a resounding NO to the creation of the Republic of Persia. Thirty years on, the majority of Persians have come to this realization, that a minority including a naïve teen age boy had come to, all those years ago: The theological system they helped sweep to power was a mistake. I had written to the esteemed director of the office you now occupy, almost 3 years ago, returning his Nooroz greeting card, whereby declaring that I cannot accept a card from an office that supports a government which declares publicly the annihilation of another race.

Any government that has to resort to sending greeting cards boosting of its advancements clearly has something other than genuine progress to prove. If Persia had made such strides, then its own record of economic development should be the report card of its accomplishments. One never finds America or France, or even the Arab Nations, just to name a few, forcing their claims on their citizens. Since you have chosen to make this small and insignificant gesture, then let’s review the failed policies and report card of the Republic of Persia, via facts and let the public be the judge of the accomplishments you claim.

For example, the montage or Assembly of the replica’s of the early 1960’s Northrop’s F5 tiger II fighter aircraft series, by the Persian military Industrial complex is not a new phenomena. The Shah of Persia (and in no way am I alluding to his actions being correct either), had the foresight to have signed an agreement with Lockheed Martin, the manufacturer of the F16 fighting falcon, to have them produced in Persia by the Mid 1985. F16 was a jet manufactured only in late 1970’s and much superior to the outdated F5, and was to have a service life of 30+ years. Its production was to be completely licensed to the Persian military industrial complex at the time when the United States armed forces were still using the fighter jet as its foremost aerial combat fighter. Only decades later in the early 2000, Turkey a member of NATO, was given a license of partial manufacture. You would agree with me, that the Shah had the foresight to position its dominance in the region by spending as much energy, resources and petro dollars as the current regime is spending. Therefore you have not altered the path from that of what the Shah took and you have not taken any new direction other than using the same path he had the foresight to carve for you.

The Nuclear technology that is at the forefront of all headlines was the work of the Shah’s regime. It was his Nuclear and Atomic Association or Sazmaneh Energie Atomie, that gave the foundation for your regime to resurrect. With the help of a convicted Pakistani scientist and a third rate rag tag group of laid off Russian scientists, billions of dollars in cost overruns, financial mismanagement, safety violations, and years behind schedule, you might be able to bring it back on line, only to be used to produce weapons of mass destruction in violation of the NPT treaty to which your government is a signatory of. You intend to use it to murder millions of innocent people, while the Shah was trying to increase the prestige of his country and with it his religion in the world’s eye. The Great Persian people do have a right to Nuclear Technology, only not under this regime.

You claim that under the leadership of this and that, Persia today is a powerhouse of economic self sufficiency. How could anyone with a 12th grade level of education look at the official and semi-official figures released by your own regime, stare in disbelief at the staggering numbers and come to the same conclusions you have. In what country and economic system would a 40% inflation rate, 25% unemployment rate, a GNP of less then 1/5 of what the Shah’s regime left for yours; can one consider this accomplishment a great one?

And finally I can perhaps write a manifesto of failed accomplishments of the Republic of Persia, but I will conclude by bringing your attention to that of the G20 economic powerhouses, of which Saudi Arabia, the country who is the sworn enemy of Persia, and your brand of Islam, was a participant and you were not even a footnote to be considered for invitation. Your low double digit billion dollar GDP, pales in comparison to their almost a trillion dollar in wealth generation. Mr. Rahmani, the Shah of Persia handed to your cohorts an economy (and now we observe) a much humane political system and your kind have managed to reduce it to a footnote in the annals of human history, and one of the most barbaric regimes in the world.

No! Mr. Rahmani, I do not share your enthusiasm in a failed 30 year regime. I and those like me who have the love of Persia and the many contributions it had made to human civilization more than 2000 years ago in mind, can only look at the propaganda and be saddened by the lack of respect you have shown the intellect of the great Persian nation.

No regime can cling to power by any claim other than that of freedom. Hundreds of years before you, Christians realized the absurdity of what the Catholic Church was claiming. Islam is no different and will follow suit soon enough.

A citizen of the US and world humanity

PrevPreviousMy Name Is Iran
NextFeeling Like an Outsider in SF: June 20, 2009Next