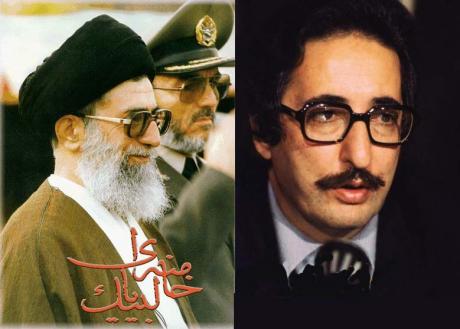 Ayatollah Khamenei Slams AbdolHassan Banisadr’s Government in Iranian Parliament. This is the moment that the Iranian Parliament dismissed AbdolHassan Banisadr, the first President of the Islamic Republic of Iran, with 178 positive votes and only 1 negative. Banisadre Fled the country and joined the People’s Mujahedin Khalg’s Leader Massoud Rajavi in Paris before distancing himself from the MKO party deemed at the time as a Terrorist Organization by the European Community.

Iranian politician, first president of Iran, 1980–81, after the Islamic Revolution of 1979. He was an important figure in the Iranian Revolution of 1978–79, serving as a bridge between the political intelligentsia and the Islamic clergy opposition to the shah’s regime. After the revolution, Bani-Sadr became foreign and economics minister in November 1979 and was elected the first president of the Islamic Republic in January 1980, and chair of the defence council. After his dismissal by Ayatollah Khomeini, he fled to France.

After taking office as president, Bani-Sadr was criticized by Islamic fundamentalists within the ruling Islamic Republican Party for his conciliatory stance in the US hostage crisis. He was dismissed in mid-1980 by Ayatollah Khomeini for failing to establish a ‘truly Islamic country’ and a committee of inquiry found him guilty of disobeying Khomeini’s orders as Imam (religious leader). He fled to France, where he was granted asylum and where he founded a National Resistance Council. In his extensive writings he has remained committed to a form of Islamic socialism, viewing a belief in equality as an essential feature of Islam.

The son of a preacher and landowner, Bani-Sadr studied theology, economics, and sociology at Tehran University. He supported Muhammad Mossadeq in his opposition to the shah of Iran, Muhammad Reza Pahlavi, and, after a brief imprisonment for underground activities, was exiled from 1964. Settling in Paris, he earned a doctorate in economics and sociology at the Sorbonne University and became an adviser to Ayatollah Khomeini, when the latter moved to Paris in 1978.