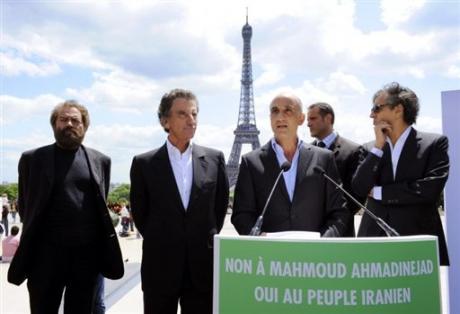 “The Iranian people are ashamed of their unelected President. It should be noted that he was elected after a mascarade of an election and an end should be put to this fraud”, said Bernard-Henri Levy. The French Philosopher ( author of American Vertigo) noted the “dignity and courage” of those who are demonstrating in Iran to denounce the electoral frade and added ” The international community should put its entire  influence to force a recount of the votes and allow a second election.”

An Iranian entrepreneur and political activist  Amir Jahanchahi, had called upon this rally said: “Things will evolve in Iran only if we support massively the demonstrators.”, he added” Ahmadinejad HAS TO GO !”.

Demonstrators wore the Badge with the incription: “Where is My Vote ?” on a green background which symbolized the campaign color of the unhappy candidate Mir Hossein Moussavi.