Azadi: I am near! 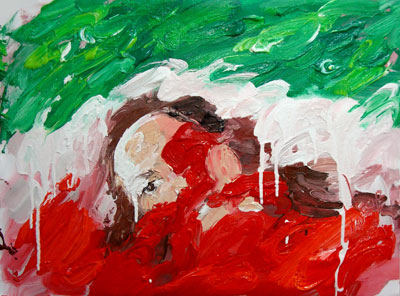 Surrounded by the darkness of the night I cannot help but to think of Iran. For my nights may be dark in Europe but while my heart tells me of the darkness during the days in the streets of Tehran I can hear it break. Iran is not what it used to be and I cannot believe how it has come to this.

Ashamed and appalled I listened to ayatollah Khamenei’s sermon on Friday while he approved and ordered the killing of his own people. History has often shown us the cruelty of the Islamic regime but these days they have confirmed to the world what we ourselves have known for decades, that democracy and freedom are not possible with an ayatollah as ‘supreme leader’.

The day after the ayatollah’s threats towards the Iranian people a young girl died in the streets of Tehran. She, being one of the people and thus a threat to the existence of the dictators in Iran, bled to death after being shot by one of the regime’s bullets. They lost one enemy that day but gained millions of others while the death of the Iranian student was filmed and posted on the internet where she touched the whole world. Her name was Neda, meaning ‘voice’ in Farsi. And she, a victim as well as a hero, was one of the many Iranian voices that are calling out each day for ‘azadi’, freedom, in Iran. Hence the ‘neda’ of the revolution crossed the borders of Iran and demanded to be heard.

So the images of the final seconds of Neda’s life reached me as well and as I watched the devastating film of her death I couldn’t help but to wonder what she saw when her eyes looked up one final time before they rolled down and closed.

Could it be that she was rewarded for her bravery with a glimpse of the future? When she looked up to the blue sky, did she see the country that she loved so deeply? Is it possible that even though she never got the chance to bear her own children she saw the children of future generations playing and living in harmony? Could she have seen laughter and joy in the streets of Tehran? Or could it be, I wonder, I hope, that she saw Iran…free at last.

Today it was exactly two weeks since the presidential ‘elections’ in Iran took place. Two weeks of darkness during which many people have been captured, tortured, beaten, abused, blinded and crippled. But still the Iranians continue to show their courage, their strength and their perseverance. They continue to fight, for Iran needs democracy and it deserves freedom.

So even if ayatollah Khamenei would dare to give another stern speech, warn the opposition and threaten the people, his words cannot break their will nor shall they break my pen. Freedom is close by. I can, even from afar, hear its footsteps approaching and its ‘voice’ shouting: Fight for I am near!