The Problem of Leadership 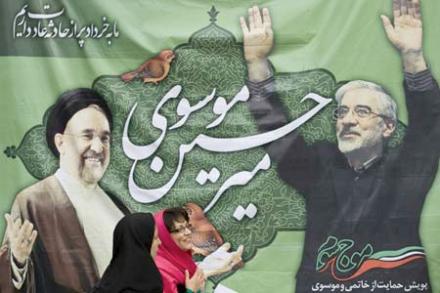 There is no longer any doubt that the chief “engineer” of recent elections in Iran is no one but Hojjatol-Eslam Khamenei. The theory that Khamenei has long been surrounded by a group of fanatic and dogmatic clergy, and that this group, via Ahmadinejad, has descended on the Supreme Leader and therefore has taken control of the “Regime”, does not match up with the realities we observe.

Khamenei controls all the affairs of the state and, despite his weakness of character and political shortsightedness, he is determined to use his position as the Supreme Leader to the fullest extent possible. But, aware that he is dwarfed when compared to his predecessor’s reach and influence among the people, and unable to muster support for a direct confrontation with his competitors and opponents, he has resorted to fraud shrouded in a Sharia veneer —  in principal, his prerogative.  His publicly expressed opinions before the election, his premature congratulations the day after the vote, his presence at the Friday Prayer, the lines he has drawn in the sand for his protestors and opponents — and all this even before the so-called legal deadline for the review vote counts and certification of the results by the legal authorities, including the Guardian Council — all this leaves no room for any doubt or confusion about his direct interference in condoning the manipulation of the election process and deeming it necessary to safeguard the higher interests of the Islamic Government.

A quick glance at the past clarifies this point.  In 1997, when the huge and spontaneous welcome for Khatami met his participation in the election, the Reformist Movement was created.  Khamenei, a weak and impotent leader fearful of his shaky power and status, resolved to nip the Reformist Movement in the bud. It was then that all methods to stop Khatami’s victory were discussed, including the view that election fraud can be condoned under a veneer of Sharia.  At that time it was President Hashemi Rafsanjani who, in one of his speeches, vehemently and directly opposed such a view. And, as also evidenced by the results of the 1997 election, he remained true to his word. But Khamenei did not sit idly by and began scheming against Khatami and the movement that had gained social significance with his election.

Khamenei used all the levers of power at his disposal to contain Khatami, and to this end nothing was barred: closure of newspapers, the arrest and conviction of journalists and of Khatami’s colleagues — even among the clergy — and the bloody crackdown of people’s protests, reaching a zenith in the savage attack on the student dormitory on Tir 18th, 1378 (July 9, 1998). Now it is certain that his policy goal of paralyzing Khatami’s government drove him to his participation in the “Serial Killings”. Either he, resorting to Sharia law, directly ordered the murder of Dariush and Parvaneh Forouhar, Mohammad Mokhtari, Mohammad Jaafar Pooyandeh and Majid Sharif, or he delegated that edict to the fanatic mullahs he had surrounded himself with. They also tied unsuccessfully to assassinate Saiid Hajjarian.

In this context and against this backdrop, one can grasp the dimensions of the fraud in the recent elections. If it was possible in the elections of 2005, because of people’s hopelessness and dejection, to patch things up with 5 to 6 million fraudulent votes of Bassijis, Guards and dead people’s birth-certificates, and produce Mr. Ahmadinejad out of the box vis-à-vis Mr. Karoubi and then vis-à-vis Mr. Rafsanjani, this time around ballot boxes and vote counting had to be abandoned altogether, and instead the numbers and election statistics were to be rigged to such a scale that would both be an answer to the unprecedented participation of people, and at the same time would produce an intimidating wide margin of  victory  over the reformist candidates, for a president aligned and allied with the Supreme Leader.  And to seal the results the armed forces would take to the streets and put on a show of “power” on the very afternoon of the voting day.

Indeed, given the workings of the Islamic Government over these past thirty years, such “engineered” planning was nothing extra ordinary and with some good luck and fortune, it would have been possible to force it down people’s throats. But much to their amazement that was not to be.  In a spontaneous and self inspired manner people took to the streets to protest the Sharia-veneered fraud and the confiscation of their votes; and even after the Supreme Leader drew lines in the sand they chose to cross those lines and continue their protests. More surprising than people’s protests was the fact that their candidates, even though they had passed through the “eligibility approval” filter of Supreme Leader’s operatives and had vowed their allegiance to the Supreme leader, refused to accept the fraud and sided with the people, at the cost of confronting the Supreme Leader.

To call these achievements victories is by no means an exaggeration. The Reformist Movement, akin to other forms and methods of political struggle in the recent political history of our country, enjoys a highly moral status, and inevitably like those others, apparently at this time, has to take pride and joy in its moral victory.

Indeed the difficulties and complexities of the Reformist Movement  arises from the fact that this time the Supreme Leader is publicly confronting it, thereby positioning it in direct confrontation with the Regime. And this is what Reformism, given its innate character and mission, has tried to avoid by circumventing the office and authority of the Supreme Leader.  The insistence of the Reformist Movement in circumventing a direct confrontation with the Regime, contrary to the views of its critics and opponents who come from diverse spectrum of thought and have completely different perspectives and perceptions, does not diminish its credibility or originality.

On the contrary, given the current circumstances and considering the recent events in our country, this avoidance of excessive engagement and the adherence to a balanced progress, is a clear proof of the originality of this Movement. It is indeed the insistence of the movement on peaceful methods that has attracted vast groups of people that have put their heart into it. With their simple and practical political sense, more a political intuition rather than awareness as a consequence of scholarship in politics, people know much better than lifelong career politicians, that stepping into the final confrontation, is imprudent and borders on insanity, while the country  lacks any preparation for tumbling into an unpredictable situation.

Unfortunately the critics of and those disgruntled with the Reformist Movement are not limited to the old timers and the previous generation of political activists and strugglers, who have grown accustomed to their familiar, traditional and classic “opposition” and can neither see nor tolerate the growth of a real opposition in the country. Some very learned and knowledgeable people, whose grasp and understanding of history is not to be questioned, also interpret the wave of people’s protests after the election as pirates’ wars over the booty of people’s votes. They insist on waiting for someone else (who?) to be the pallbearer for this coffin that has been burdening people for the past thirty years.

Given the current circumstances, it is meaningless to talk of “The problem of Leadership in the Movement and the Search for Ways to Elevate It”. This is more reminiscent of the days when political struggle was limited to the coming together of a handful of enchanted people to “form a study cell and write platforms about the world and internal conditions” and then be picked up by SAVAK, with their manuscript pamphlets onboard.  The current Movement, embodied in the slow and deliberate Reformism, on a path albeit winding and laden with potholes, has been years in the offing; and in the form of elections it has drawn millions of people to the stage. Their belief in their righteousness and originality has empowered them to the point of confronting the Supreme Leader.

Those, who have followed the struggle in this election from a distance or close by, can clearly see that the current Movement has selected deserving and capable leaders in the persons of two candidates that people now fully support.  The fact that Mr. Moussavi and Mr. Karoubi have stayed true to their promises and the fact that Mr. Khatami has continued in his support, as well as the untiring efforts of their colleagues, all this has provided people with something to build and lean on. It is already certain that these three political leaders in a span of few weeks, have traversed a historical period and have left behind the role of the candidates whose ‘eligibility’ had to be approved by the Guardian Council, and have morphed into men who have helped our people take a huge step towards their long standing ideal — the right to self determination.  These leaders have already joined the chain of clergy and religious people who, from the dawn of the Constitutional Era onwards, have struggled to institutionalize free elections and whose good names have been a source of pride for us Iranians.

At this point in history people are asking for nothing more than free elections and they well know that what ever other demands they may have can only be conceived and realized through free elections. The steadfastness and perseverance of their candidates has placed these men at the head of the movement in a natural and spontaneous manner. This is a fact that people have affirmed with their massive presence and in their numerous slogans. It is high time that political activists and all strugglers pay attention to this plain fact and focus all their efforts towards its reinforcement and consolidation.

Optimism in these achievements of the people’s movement, and the morphing of the men who have ably taken on the role of leadership, should in no way cause us to overlook the dark wall of tyranny and ignorance barricading the people. This wall is especially daunting since it rises from among us, from among our people and the pieces of our country, and it has deeper and older foundations than the ideals for which the great majority of our people today are willing to sacrifice themselves and give their lives. It is the depth and age of these roots, the complex and exhausting nature of  these confrontations, that calls on all those lovers of truth and freedom to abandon their personal old habits and considerations, fix their sights and hearts on the common good and the public interest and see their own happiness in the fulfillment and realization of the ideals of all those who are on the stage today with empty hands and open arms,  summoning us all to whole heartedly join them in their travails.