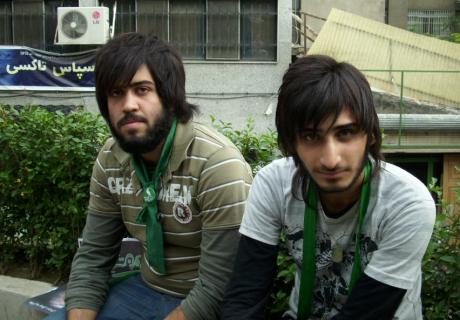 The third debate was between Rezaei and Mousavi.

This was not only Mousavi’s back to back TV debate but also the first time to respond to Ahmadi’s insults and claims.  The 2 candidates were cordial to one another and since both had served in the same time (war years) there were giggles and old memories.  Rezaei once again wanted to talk about privatization and section 144.

Mousavi opened up by saying “man’s manner is better than his job” referring to Ahmadi’s insulting his wife and so on.   He went on to respond to some of Ahmadi’s insults and claims which he was apparently shy to respond in the first place.  Responding to Ahmadi made the moderator to say something that due to election rules if you “talk about a candidate who is not here” more time will be allotted to him and he’ll have the right to respond alone, which Mousavi ignored and said something to the effect of “whatever”.

This debate wasn’t that big of a deal and even though Mousavi tried to counterattack Ahmadi a day late and dollar short it wasn’t to full expectation but it was anxiously anticipated so it was interesting and not too boring.

The next day the slogans of “man’s manner is better than his job” and “whoever lacks reason, brings in wifey (namous) to the mix” (har kas ke kam miyareh namous vasat miyare) were printed and distributed in the streets.

I gave this debate a tie.

The fourth debate was between Karoubi and Ahmadi.

Before the debate friends and family were saying; let’s see if Ahmadi’s roo (arrogance) has been lowered.  I said why would it?  They said because he was rude and since then Mousavi and others have used it against him.  I said are you kidding?  He’s been rude before the election, before the debates, during the debates, after the debates and is saying to everyone who is listening that he’ll be rude in future debates too!  What makes you think he is going to slow down?

This debate was by far the most comical and amusing debate.  It was the best!  Since Karoubi had watched Ahmadi’s previous debate he came to the debate locked and loaded.

Karoubi must have known the criticism and jokes about the moderator so he started by turning to the useless moderator and saying you know I am a man who does not listen to rumors and innuendos but my staff showed me 2 video clips that I could not believe but had to because I saw it with my own eyes.

He said the video was of a speech Ahmadi had given where he had claimed a halo over his head during his UN visit and his claim about the hidden Imam visiting him.  He said claiming to have seen hidden Imam is kofr (blasphemy) and not within Islamic beliefs.

He said the 2nd unbelievable video was when Ahmadi claimed US agents wanted to “berobayandam” (steal me)!  He said he has gone to US during his tenure as speaker of the parliament and of all the things US is accused of, protecting a diplomat is their utmost concern and they had provided a lot of security and bodyguards and Ahmadi’s claim was another embarrassment for Iran.

When it was Ahmadi’s turn he brushed them off but Karoubi’s damage was done.  Ahmadi had also prepared charts, ala Ross Perot, for this debate and his attempt to handcuff Karoubi this way.  I am sure Ahmadi knew Karoubi would come blazing, especially after Mousavi debate, so this was his way of deflecting attention.  By the way, Ahmadi’s charts’ sizes, the way he went about presenting them on TV, even his height were really so copy cat Perot, I am not kidding!  The only thing missing was can I finish? can I finish?! which he could’ve said too given Karoubi cut him off so many times 😉

His charts were rubbish showing 15% inflation.  In response Karoubi said I can bring in my “experts” and we can see how these charts pan out.  He said my nan-joon (grandma/nana) is not alive but had she been alive she’d have known inflation is more than 15%.  Ahmadi in response said an executive and leader of a country has to be an expert himself a “senior expert”.  He asked Karoubi how you can be the President when you don’t know about economy.

While Karoubi’s accusation of his nana knowing inflation is more than 15% was right on, I thought Ahmadi scored a point too.  I thought these are the nuances candidates should look at.  No doubt his positions on the issues were all flawed but when his opponents stumbled like the “expert” issue or let him off the hook he took advantage by piling on more.

I thought while Ahmadi’s idea of bringing in charts to try and show “meaningful discussion” was well intended but it backfired because of the 15% inflation and other nonsense.

Karoubi would also jump in out of order and would cut Ahmadi on several occasions but surprisingly Ahmadid didn’t complain much only once he said it is his turn and Karoubi should respect his time to which Karoubi apologized.  Ahmadi then brought in the lobby money and introduced by name; Shahram Jazayeri who Ahmadi accused of paying Karoubi $300K.

Karoubi responded that he does not have the power and resources that Ahmadi has and he needs political contributions just like anyone else.  He also mentioned the more important reason which he couldn’t fully disclose that Shahram Jazayeri had not only paid him but a lot of other Govt official, past and present, and at a better time and place he is ready to disclose who else received the money.  In fact, Shahram Jazyeri had paid numerous senior officials up to and including Khamenei himself.  Those who knew Shahram Jazyeri took the message.  I didn’t know who he was but my father explained it and I then realized what Karoubi meant when he talked about “others” so many times during and after the debates.

Ahmadi once again took advantage and on his rebuttal he went back to the $300K that he didn’t get an answer about his question about Mr. Jazayeri to which Karoubi jumped in sarcastically, this was one of the best highlights, by saying you didn’t answer any of my questions and you’re doing it “on purpose” (makhsoosan) and you want me to answer your question?  (You god damn motherf****r 😉  This was when Ahmadi said you’re using my time and Karoubi apologized.

At another point Ahmadi became agitated and Karoubi said you waved picture of people’s wife around and you expect no one to say anything to you?!

The next day discussion on the streets was about the entertainment value of the debate and how much fun it was and how funny Karoubi was and how he had ridiculed Ahmadi.  All around people were reliving the debates by quoting Karoubi.  In our family gatherings I along others were quoting Karoubi and laughing it up!  I told them now this is how you confront that son of a bitch!  If only they could attack more even though time is running out.

I gave this debate to Karoubi since he fired several salvos, although he failed to present himself as “presidential material”; reference Ahmadi’s assertion of “senior expert”.  Like McCain had said economy is not his strongest point.  Although he may have thought since he is not going to get elected let’s go commando on his ass and live it up!