In search of Shantaram 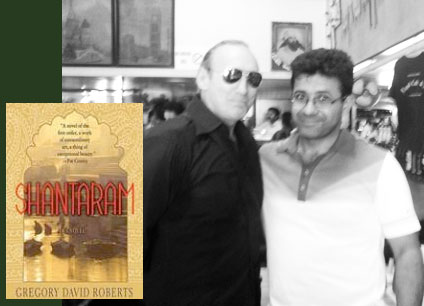 Three hours off my plane, back in May, I decamped at the YMCA Colaba, south Mumbai’s tourist district, and made my way to the bar where I did a stand-up show in February. It was closed so I went to Leopold’s, which I had read about in David Gregory Roberts’ autobiographical novel, Shantaram. In it, the escaped convict from Australia joins the Bombay mafia and lives in a slum.

One or two journalists I’ve spoken to don’t like the book and how it represents Mumbai although one conceded that it “evokes 1980s Bombay quite well.”

“He’s a fraud,” says one person. “He’s quite a character,” says another.

I ask a book vendor in Colaba whether he shifts more copies of Booker-prize winner The White Tiger or Shantaram. “Shantaram,” is the immediate reply. “He signed 20 copies here,” he says. The vendor smiles.

So far as representation goes, we have grounds to complain too – every Iranian featured in the story – and they are legion – is crooked and meets a violent death. Still, I have to admit, I like the guy. In fact, in recent memory I have not ripped into the first few pages of a work of fiction so eagerly as I did with Shantaram.

I can’t remember a book that was recommended to me by five people, all of them women. Reading it surprised me – Shantaram inhabits an exceptionally macho world and describes in detail gruesome fisticuffs where people lose important body parts.

Yet, of course, despite all the macho posturing, Shantaram is sensitive and in touch with his emotions – he has a degree of self-awareness regarding himself and his relationship with women that most of us guys, I’m sorry, lack. Carla, who he often courts in Leopold’s, has him hanging on her every word, runs circles around him with her wit and, ultimately, eludes him.

Roberts – if the central character is anything like his author – is candid about his vulnerabilities, refers to himself as ugly and cuts a figure who is hurt at his very core. It’s refreshing when an author distils apparent pain into an entertaining story.

An American journalist I met in Goa some months ago joked about Shantaram’s popularity with foreign travellers. “They issue you with a copy of at passport control,” she said.

In one or two online discussion groups the book is dismissed as an exercise in self-aggrandisement, the author portraying himself as something of a super hero in the face of adversity (admittedly, one passage when Shantaram swiftly recovers from a bout of drug abuse with a course of self-motivated exercise smacks of wishful thinking to say the least). The fact is that the book is a phenomenon. Shantaram is the grown-up’s Harry Potter.

Walking toward Leopold’s, I couldn’t help wondering if He might be there. I step in, and hey presto, sitting in a corner under a picture of the Prophet Zarathustra – it’s an Irani-Parsi owned café – there he was, with a group of people. I phoned my friend Suchitra and whispered: “It’s Him.”

“You’ve stepped into Mumbai and within three hours have met the Prophet Zarathustra?” she said.

“Not Zarathustra, it’s Shantaram, under a picture of the prophet.”

Before I knew it, Zarathustra – sorry, Shantaram – got up to leave. So did his friends.

If you work in the media, or indeed have any sense of cool, the last thing you do is take a picture with a celebrity.

“Mr Roberts,” I said. “Would it be crap if I asked to have my picture taken with you?”

“No, not at all,” he said and posed while I handed my cell phone camera to a waiter. It had to be done. “If it was Johnny Depp,” who is to play him in the film of the book, “I wouldn’t be doing this,” I told him. But “Shantaram” in Leopold’s had to be done.

He wore a black shirt and blond pony-tail and, of course, the first thing I thought was could I handle him in one-to-one combat as per the book, a thought that I didn’t give voice to lest I became another Iranian who got pummelled. I did raise the issue with him though. “How come all the Iranians in the book got killed,” I said.

“Abdullah survived,” he corrected me. And it’s true, he did, well, just about.

“Thanks Shantaram,” I said. “Oops, sorry, didn’t meant to call you Shantaram.”

A version of this article first appeared in Sunday Mid-day in Mumbai.

PrevPreviousCartoon, Everyone knows rahbar is a caveman
NextIn Iran, tensions build ahead of Rafsanjani’s Friday sermonNext