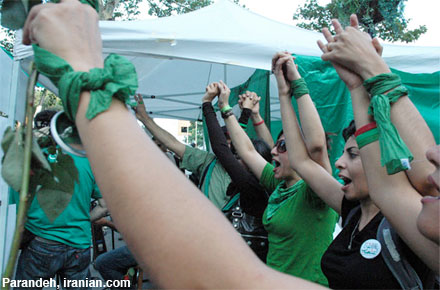 I was among those who participated in the 3-day hunger strike in front of the United Nations July 22-24 in support of the Iranian people’s struggle for justice and liberty.

It was an amazing gathering, full of emotions and compassion, love and determination, young and old alike, men and women, strong and weak taking part not only in a 3-day hunger strike but tolerating standing all day, sitting on the ground or on flimsy uncomfortable folding chairs for twelve hours a day, even in the pouring rain.  The selfless attitude of the young volunteers who worked on the logistics (setting up, running the show, assisting the media and even tirelessly serving the needs of those of us on hunger strike) was incredible.

There was an outpouring of support from all corners of the globe, not to mention those who traveled from across the United States, Canada, Europe and even Australia to take part in the event; I, myself, from Florida.  For the participants, what transpired was nothing short of exceptional and memorable.

In the sixties, many of us participated in weekly meetings, seminars, work shops, and sit-ins. For me it all culminated in the creation of a periodical, Defenders Of Freedom, in 1968 to promote human rights and democracy in Iran.

Continuing the struggle against the Shah’s dictatorship inside Iran became our mission; meeting in secret, gathering in the mountains, and then becoming involved and engulfed in the 1978-79 revolution, erroneously labeled Islamic.  The popular uprising started with sporadic demonstrations in different cities, graduated into unrest, civil disobedience and strikes.  The resulting mass movement culminated in the revolution derailed after the return of Khomeini and stolen by Islamic clerics.

While in Paris, Khomeini had promised: respect for human rights, a free press, equality of men and women, and self-determination. He claimed that he would be a teacher and would not interfere in politics or government.  However, once he   returned to Iran, he reneged on all his commitments. One must confess his inevitable ascendancy to power in the vacuum created by the Shah’s departure was not solely his doing; all Iranians must share the responsibility.

First and foremost, the responsibility lies with the Shah for destroying all remnants of opposition groups and parties, disallowing democratic institutions from taking shape and implementing severe press and print censorship.  Once he left the country his monarchy collapsed with all its apparatus including his Royal Armed Forces, which had cost the Iranian people billions of dollars of wasted expenditure.  According to one of his close aids, the monarchy in Iran was like a huge chandelier which was held with a single cable (the Shah).  Once the cable was severed the chandelier shattered and the system fell to pieces. (1)  Next, responsibility belongs to the intellectuals for so naively falling in line by failing to recognize what Khomeini had been writing for years versus what he had recently been saying.  And finally the Iranian masses must share some responsibility for making Khomeini an idol as they had done with the Shah before him.

I had the dubious honor of being one of the very first people who were imprisoned by Khomeini’s henchmen and spent enough time on death row for over 500 people to be executed. To protest the condition of prisoners, the lack of due process and the absence of justice I went on hunger strikes.  One of my cellmates writes about my hunger strike in his book: “While on hunger strike, when he walked the hallway, the prisoners stood on both sides of the isle in respect, like the respect a pregnant woman receives from young girls.” (2)

Back in the U.S., I continued to speak and write and the cycle continued.  However, I have a feeling we finally have a winning combination to achieve our objective even though there are forces trying to undermine the movement, whether unintentional or by design.

There are one-dimensional ideologues with one-track minds, like the Monarchists and the Islamists (Velayat Faghih); both of whom grant special privileges to a family or a class of people, the Monarchists to the Pahlavi family and the Islamists to the Ayatollahs. Democracy does not recognize a privileged class, law does not discriminate and justice is blind.  Furthermore the Iranian masses struggle for equality and self-determination and not for any privileged class or family.  Some Communists groups also label us as Imperialist stooges, as do the rulers of the Islamic Republic. These Communists are committing the same error of judgment made during Mossadegh’s premiership and the nationalization of Iran’s oil movement.

These groups are blind to what is taking place inside Iran.  The Iranian people are challenging the usurpers of power to attain what is rightfully theirs.  The Iranian people, at risk of being beaten, imprisoned tortured and even martyred demand the right to govern themselves free from the guiding hands of the religious leaders.

The Green Movement holds the aspirations and hopes of the Iranian people for justice and self-determination.  Unlike the detractors insinuation that green is religious; the Green Movement is neither Islamic nor does it belong to Moussavi.  Moussavi has already admitted he is following the people, not the other way around.  The color green goes back to the time of Mitra and Zoroaster.

We support the green movement for what it is, an all-inclusive, multi-facetted and gender-blind movement seeking truth, justice and liberty.  We must come to terms with the fact we have a long, bumpy road ahead of us and we must be willing to travel it to the very end.