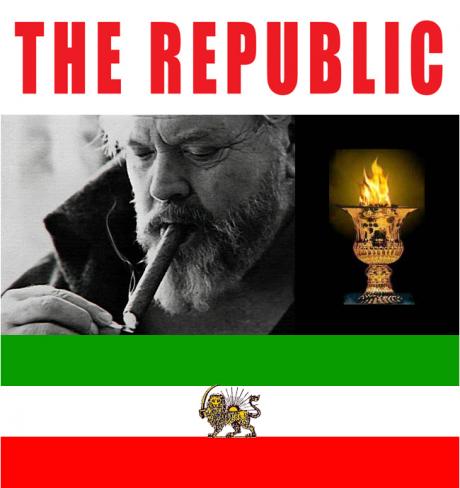 Although Not a “Jomhurykhah” Myself I would nevertheless like to dedicate this Orson Welles rendering of “Battle Hymn of the Republic” to All My Republican Friends on this site as well as those who are dying for their Constitutional Rights in Iran.

Julia Ward was born in New York City in 1819. Her mother died when she was young. Her aunt, who was a strict disciplinarian, raised Julia. When her father died, Julia’s guardianship reverted to a more lenient uncle. Julia became more liberal on social and religious issues.

When Julia was twenty-one, she married Samuel Gridley Howe. He was a veteran of the Greek War of Independence and had written of his experiences. He was a radical Unitarian and was the director of the Perkins Institute in Boston. Samuel carried his strict religious beliefs into his work with the blind and mentally ill. He opposed slavery.

Julia became a Unitarian Christian. She believed in a loving God who cared about humanity. She believed Christ set a pattern for behavior and that it should be followed. She became a religious radical.

Samuel had been attracted to Julia’s wit and quick mind. However, he believed that a woman’s place was in the home and that she should have no life outside of her domicile.

Julia wrote poetry and attended church. She found her life frustrating – her marriage stifling. She did not adjust to being subsumed in the professional life of her husband. She became impatient with the violent and controlling Samuel. He mismanaged the inheritance her father had left her and was a womanizer. Julia stayed with him because he threatened to keep her children from her if she divorced him.

In lieu of divorce, Julia taught herself several languages and studied philosophy. She also educated her children. She supported her husband and worked beside him for a short time in the publication of an abolitionist paper.

When Samuel led anti-slavery settlers to Kansas in 1856, Julia published her poems and plays. This angered Samuel. When American President Millard Fillmore signed the Fugitive Slave Act, it drew people in the Northern states into the slavery issue. They were now legally responsible to return runaway slaves to their Southern owners. The nation divided over the slavery issue. John Brown led his men to capture arms that were stored at Harper’s Ferry. He planned to give the guns to fugitive slaves. Brown was defeated and hung for his act of treason.

Samuel is believed to have been one of the Secret Six. These men bankrolled Brown’s efforts at Harper’s Ferry.

Samuel and Julia became a part of the US Sanitary Commission that tried to assure sanitary conditions in the Prisoner of War Camps during the Civil War. Though their efforts saved lives near the end of the war, many men died from infection early on.

In 1862, President Lincoln invited Samuel and Julia to Washington as a result of their voluntary work with the Sanitation Commission. While there, the Howes visited a Union Army Camp in Virginia. Here they heard the men singing a song about John Brown. Freeman Clarke, a clergyman who had read Julia’s published poems encouraged her to write a new song for the war effort. It would replace “John Brown’s Body.”

According to Julia’s own account, she awoke the next morning at dawn with the lines of a new song echoing in her head. She lay still until the last verse was complete, then arose and scrawled the words on an old piece of paper. When she finished, she lay down once more, feeling that something of great importance had occurred. In February 1862, a poem titled, ‘The Battle Hymn of the Republic,” was published in the Atlantic Monthly. The poem was put to the music of “John Brown’s Body.” It became the North’s best known Civil War Song.

Julia’s religious convictions are portrayed in the song. “As he died to make men holy, let us die to make men free,” used Biblical images to urge people to adhere to their principals.

Today Julia Ward Howe is best remembered as the author of “The Battle Hymn of the Republic.” It is loved by many Americans and hated by many Southerners. Her early poems are all but forgotten. Even in her own lifetime, her other pursuits were always overshadowed by that one great poem which the Atlantic Monthly paid $5.00 to publish.

Julia’s accomplishments did not end with that poem. She became well known and was asked to speak publicly. Though Samuel never supported her efforts, he ceased to resist them.

Julia saw the worst effects of the Civil War. The loss of so many lives had touched her deeply, but her work with widows and orphans from both the North and the South made her realize that there were many negative effects caused by the war.

Though Julia took on other issues, including the Women’s Suffragette Movement and a Declaration for a Mother’s Day of Peace; her claim to fame is the writing of the lyrics to the “Battle Hymn of the Republic.” Each time we hear the music or hear the words of that famous song, let us pay tribute to the woman who attempted to do so much for the soldiers of the Civil War.