LA: Homay and The Mastan Ensemble 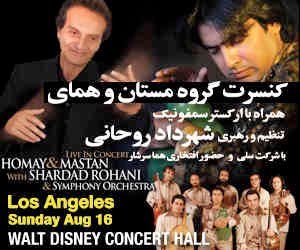 The highly acclaimed Iranian musical phenomena, Homay and The Mastan Ensemble return to the Walt Disney Concert Hall on August 16, 2009 at 7 p.m. to perform another exceptional collection of the latest compositions by Homay, with symphony arrangement by Maestro Shardad Rohani. During the first part of this program, the Ensemble will perform an operetta, written by Homay, inspired from the story of ‘Moses and The Shepherd’ by Rumi (Mowlana) written in Aarefan e Raaz by Dr. Mahmoodi Bakhtiari. The part of ‘Moses’ will be performed by the well-known and talented Iranian singer, Soley Vaseghi, ‘The Shepherd’ by Homay and the third character, ‘Raavi’ or ‘The Storyteller’ by the published author and award-winning journalist, Homa Sarshar. The operetta will be followed by several masterpieces by Maestro Rohani. In part two of this concert, the latest compositions by Homay and Maestro Rohani will be performed by the Ensemble.

“These were mesmerizing performances that produced a euphoric goodwill in the listener, a feeling that lingered long after departure from the concert hall.” LA Times-July 2008

Since early 2009, Parvaz Homay has been banned by the Iranian government officials to perform any of his musical pieces publically in Iran. This is especially difficult for Homay, since he is a true patriot to his motherland Iran and its people and lives through his music. One of his latest compositions is a very special piece called “Sarzamin e Be Karan” or “Boundless Land”, with symphony arrangement by Maestro Rohani, dedicated to the people of Iran. The August 16th performance at the Walt Disney Concert Hall will be his first public concert since The Mastan Ensemble’s final concert series in Homay’s hometown in northern Iran, which took place during eight consecutive sold-out evenings, attended by their devoted local Iranian fans, consisting of all ages, five to eighty-years old; specially the youth inspired by Homay’s music and talent.

During their 2008 U.S. and Canada Tour, The Ensemble preformed at some of the most renowned stages, including Walt Disney Concert Hall in Los Angeles, Strathmore in Washington, D.C. and Roy Thomson Hall in Toronto, Canada. The 2009 U.S. Tour will once again include venues such as Lincoln Center in New York City and of course Walt Disney Concert Hall in Los Angeles. Homay strives to collaborate with accomplished artists and musicians, both inside and outside of Iran and prides himself in always setting the bar higher in bringing innovation into his music, showcasing the Iranian classical music in the global world music scene, to gain the recognition it deserves. He has many other unique musical projects and collaborations in mind, which he hopes to bring to fruition, if permitted.

Media inquiries are encouraged to further share the message of these talented artists globally, who have overcome many obstacles to be able to pursue their passion, and have traveled to the United States with the help of supporters of the Persian traditions and music. Sample of their music is available upon request.

NOTE: Per the venue’s policy, only registered members of the media may attend the event for coverage. To register, please contact Bita Milanian at 310-746-5429 or bita@bflybuzz.com.

Tickets are available through Ticketmaster at 800-982-2787 or http://www.ticketmaster.com.