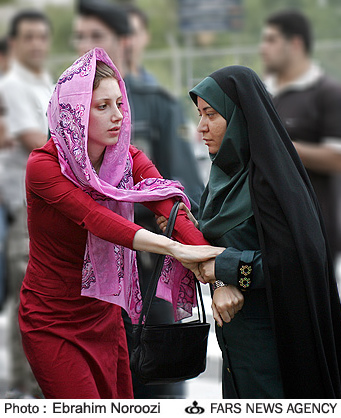 The following grew out of an attempt to address an issue raised by a reader of my previous post in this blog. I was first going to post it as a comment, but it grew so big that it may now deserve its own place in the blogsphere!

Your question, AK69, if I understand it correctly, is whether “Religious Harassment” is a reaction to the harassment of religious folks by those who are not so firmly committed to that particular line of faith.

My short answer: Not always.

It is true that followers of various sects and religions have been persecuted throughout the history by followers of other religions and sects, and sometimes by those who were followers of no particular religion at all, or, in recent times, those who were simply anti-religion. Lots of churches, mosques, and temples have been closed down, burned down, or simply razed to the ground in the war of religions. Shiites, for example, were given quite a hard time at one point, their beloved imams having been imprisoned and allegedly poisoned or simply killed in broad daylight in the middle of a desert. In quite the same fashion, Iranian Shiites are now giving a hard time to Sunnis and Baha’is and Sufis and anyone who they perceive as an ideological threat.

1)      Is one act of harassment necessarily a reaction to other acts of harassment in the opposite direction? In other words, are harassments always retaliatory? No.

2)      Does being harassed justify “harassing back” the initial harasser? I think not.

In particular, and as an interlude: is IRI’s forced hijab policy a response (a “backlash”) to Reza Shah’s excessive anti-hijab measures? I am not so sure. Do you really think Khomeini would not force the Islamic dress code on Iranian women, had Reza Pahlavi not harassed religious women on the streets of Tehran? The answer may not be as simple as we would like it to be, especially when we note that Khomeini did not (could not? would not?) reverse Iranian women’s right to vote after the revolution, although he had criticized women’s suffrage back in 1963 (1342 A.H.) on religious grounds!

Now, back to the above questions:

1)  Although there may be some truth to the “backlash theory”, I am not going to take this theory too seriously, partly because its main function is to play down the crime of the aggressor. One should note that religions, due to their holding up a certain unverifiable “truth” that is so dear to their followers have an innate tendency to provide justification for unprovoked aggression against those who deny or defy those said “truths”. In other words, religious aggression has its seeds in the very nature of religion and how they are built and the way they operate: “Believe in what we believe in, or we will harm and harass you!” or “Believe in what we say is true, or you will be damned and burn in hell for an eternity!” So many religious people need no more reason to harass the “heathens” other than their knowing about the divine “truth” and heathens’ resistance to acknowledge their specific truth. Of course, non-religious people who are firmly convinced that they know what the truth is are also predisposed to harassing the religious folks, and such harassment should also be equally opposed. (We will deal with this issue in more detail below, and in the sequel of http://iranian.com/main/2009/aug-14 )

2) Even if there some truth to the “backlash theory”, being harassed does not justify harassing back. Harassment of all sorts should be condemned and curbed by law as well as, ideally, by society’s mores.

However, I consider “RH” in its various form and facets such a cancerous behavior in Iran these days, permeating so many aspects of Iranians’ social life, and the concept of “RH” as defined and described in the Persian piece such a unifying thread, connecting a whole lot our social ills, that I believe understanding this monstrous phenomenon from this new perspective can help our intellectuals to momentarily break away from the old clichés and refocus their attention on what needs to be tackled with in the short run. Of course in the long run, all of us are for liberty and justice and democracy and the rule of law… All right, maybe not “all of us”!