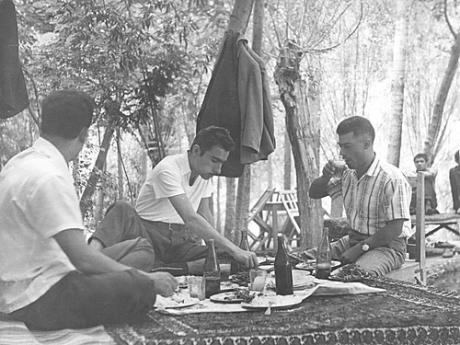 British Anchor Tim Brinton visits Iran in 1960 for a special coverage on the Oil Rich Kingdom, once known as Persia. The visit includes travel to ancient and modern Iran, looking at caviar and carpets, oil wells and airports.

Tim Brinton visits Iran on the New Golden Circle service from London to Tehran. Looking around the city of buildings and people Brinton travels north towards the Caspian Sea through the Karaj Valley and towards the Alborz Mountains. Brinton meets some nomads and shares some of their unleavened bread. Travelling onwards, past the construction of the Karaj Dam and visits locals in the village due to be swamped by the dam. There are many small farms on the plains towards the Caspian Sea and new motels are springing up around the Caspian. The Pahlevi Dynasty built hotels for royal guests, that are now available for paying guests and Brinton interviews one of the hotel managers.

The Pahlevi Foundation have provided irrigation for local farmers to farm their paddy fields. Brinton visits a Persian bath in the area, as well as the beaches along the Caspian Sea and looks out for fishing boats fishing for Sturgeon for caviar. Brinton interviews the manager of a fish factory about caviar. Brinton tries to visit another fish factory in Bandar-e Pahlavi, now known as Bandar-e Anzali but local bureaucracy prevented his visit. The report concludes with views of the Caspian Sea