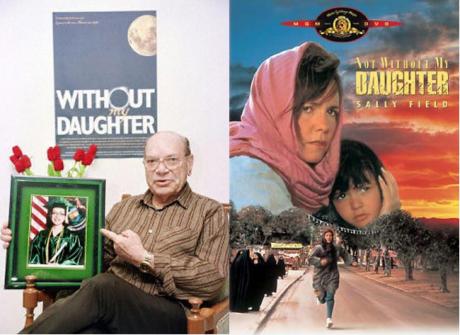 Likely marking the low point in the representation of Iranians by Hollywood, Betty Mahmoudi’s struggle to escape Iran after she and her daughter are forbidden to leave by her Iranian husband became an immediate controversy in the Iranian community worldwide. Bozorg Mahmoody (1939-2009) died today age 70 in Tehran, Iran. See AFP Report

Trailer of the Hollywood Movie “Not without My Daughter” directed by Brian Gilbert and Starring Sally Fields, and Alfred Molina

Photo: Bozorg Mahmoody, shows his daughter’s picture as poses under a poster of his documentary film at his house in Tehran 06 January 2003. Mahmoody, vilified as the repressive husband in ‘Not Without My Daughter,’ has come back with a documentary to counter the Hollywood movie on how his former US wife fled Iran with their daughter.

True or False, the vilified father gives his version of the story in this documentary: “Without My Daughter”