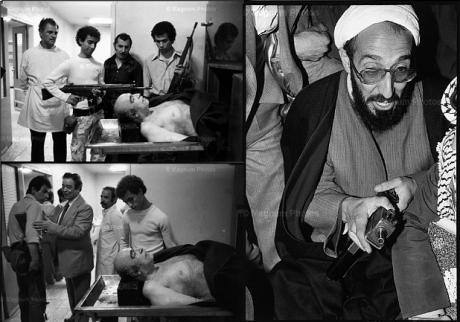 Today a prominent “Reformist” Hadi Ghaffari boasted to have killed Amir Abbas Hoveyda with the machine gun in his hand. (circa 1979)

On April 8th, 1979. The corpse of ex-Prime Minister Amir Abbas HOVEYDA lies at the morgue. He was promptly executed after sentencing by an Islamic tribunal presided over by mullah Sadegh KHALKALI, the Hanging Judge. He was however executed by a mullah Hadi Ghaffari shown here boasting with the Machine Gun that served the sordid execution. Ghaffari paradoxically has been a strong critic of the Spiritual Leader Ali Khamenei after the recent violent protests in Iran following the controversial re election of President Mahmoud Ahmadinejad.

Ebrahim Yazdi interviewed on Hoveyda’s execution refers to a Mullah executioner but refuses to name him: