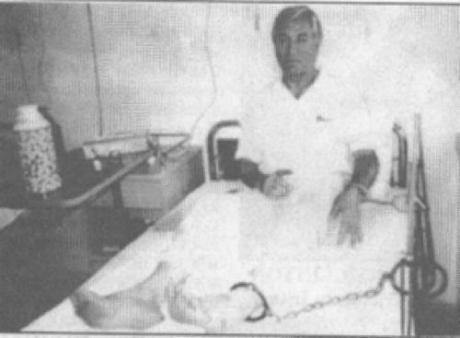 Abbas Amir-Entezam former Deputy Prime Minister in the Interim Cabinet of Mehdi Bazargan,  was sentenced to life imprisonment on charges of spying for the U.S. Placed under house Arrest only in 1995, he remains a Prisoner to this day. A Total of 27 years. The photo shows Entezam in hospital, his condition deteriorated after a long period of hunger strike, the officials finally gave permission to let him go to a hospital.

Like many other political prisoners in Iran, Amir-Entezam was subjected to various forms of well-documented torture and brutality at Evin prison in Tehran until he was placed under house arrest in 1995. For instance, he has had thirteen surgical operations in the past seventeen years. most of which have been for health problems caused by torture. Blows to his face ruptured his eardrum.  Lack of access to a toilet and an untreated prostate problem caused his kidneys to fail.  On numerous occasions, he was taken to the firing squad and told that he was about to be executed.

In 2005 he echoed Former in an Open Letter to All Iranians:

Abbas Amir-Entezam ( born 1933) was the spokesman and Deputy Prime Minister in the Interim Cabinet of Mehdi Bazargan in 1979. In 1981 he was sentenced to life imprisonment on charges of spying for the U.S., a charge critics suggest was a cover for retaliation against his early opposition to theocratic government in Iran. He is now “the longest-held political prisoner in the Islamic Republic of Iran”. , as of 2006 he has “been in jail for 17 years and in and out of jail for the last ten years, altogether for 27 years.”