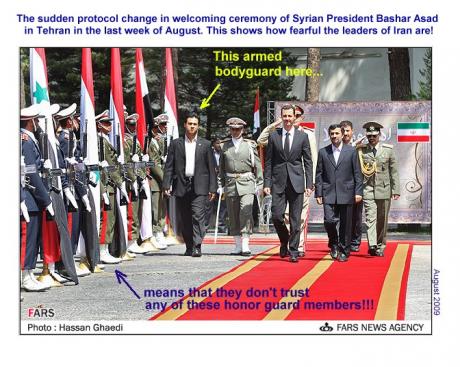 Since the post-election controversy and unrest in Iran there has been a visible increase in security measures not only in the cities and among ordinary citizens but also in government locations and official spaces such as ceremonies!

This picture was taken during reception ceremonies for the Syrian President Bashar Asad in mid-August, 2009 *inside* Tehran’s secured presidential compound! The picture shows a visible change in the official honor guard procession. For the first time (perhaps anywhere), we see a non-military bodyguard walking between the honor guard unit and the walking dignitaries!

This shows the level of fear and paranoia in the Islamic Republic leadership circles! This is inspite of the fact that each and every member of this honor guard has been cleared and verified to be “friendly to regime” and their rifles are checked before each ceremony! But there is still apparently a need to make sure none of these guard members can attempt anything unplanned!

PrevPreviousHISTORY OF VIOLENCE: Man Arrested For Being a SAVAK Agent (1979)
NextIranians to gather at Baha’i Temple in WilmetteNext