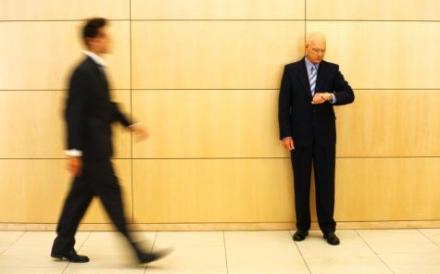 Majid and his wife Goli are planning an Iranian Dinner party (Mehmooni). As is the case, they have to deal with the date, time, guest list, and all the details that go along with such a party. The guest list starts with eight but somehow they end up with a list of over thirty people. Having such a large number of people at the house requires lots of cooking and cleaning; neither Majid nor his wife Goli are up to the task, so they agree the food will be catered.The date is set for Saturday night and the time is set to be at 7 p.m. Dinner will be served at 8 p.m., and if all goes as planned, the party should end at midnight. So they hope.

You see, when planning an all Iranian dinner party or an event you learn how to use PDF (Persian Delay Factor) in your planning process.  PDF is a phenomenon well-known by Persian concert organizers, event and wedding planners, and even ordinary people having a few friends over for dinner. Goli’s task is to call invited guests and Majid will take care of catering and other arrangements. Among the invited guests is this newly arrived couple, Ali and Shireen, who came to the U.S only four years ago. They are the type that would never commit to anything or any time. The story kind of goes like this: Ali and Shireen have been called a few times and were reminded to be there no later than 7 p.m. It is now Saturday and it is almost 8 p.m.. Ali and Shireen are still deciding whether or not to go. Once they decide that they should go, they start deciding on what to wear. After taking a shower, at around 9 p.m., they leave the house to go to the party. Meanwhile, back at Majid’s house it is now 8 p.m and only half of the guests are there. Goli is nervous that the caterer might arrive any minute and the dinner will get cold. Fortunately, there is no sign of catering service either.

Those arrived guests are all having a good time munching on appetizers, fruits, and of course sipping tea. As usual, the men are busy solving all the political and economic problems of the world, from elections in Iran and wars in Iraq, Afghanistan, and Pakistan to Obama’s plans to revive the economy. The ladies are having a good time exchanging ideas on new health ideas, the best places to shop, and of course admiring each others’ figures and the diet that goes with it.  Older folks are exchanging ideas on their cholesterol and lipid levels and talking about how wonderful life was back in Iran 30 years ago, and the kids are all playing upstairs.

It is now 9:30 p.m.; the catering service has arrived and is busy setting up the dinner table. Ali and Shireen finally arrive and announce their arrival by giving each guest three (3) kisses on the cheek. You know the rest: dinner is served, and there is some dancing, then desert, more dancing, some jokes, and possibly one or two musical performance (sonnati) by some talented guests.

At almost 1:30 a.m. it is time to say goodbye. Kids always like this last part, and as one perfectly summed it up, “I love Iranian Mehmooni. When adults start saying goodbye, kids know they still have another hour to play!!” At the time of departure, people spend 30 minutes inside and another 15-20 minutes outside by the door just saying goodbye. Finally to formally finish the goodbye, Ali and Shireen honk the horn 2-3 times to let the host know they are gone.

It is now 2:30 a.m. Sunday morning; the party is over and Majid is only thinking about the big clean-up and the weird look on the neighbors’ faces when he sees them.

So what’s wrong with this picture? Honestly if you live in the Persian time zone, absolutely nothing is wrong. Everyone from the host, the guests, children, and even the catering service knows what to do, what to expect, and when to expect it. On the other hand, if you are used to punctuality and God forbid dealing with a venue that requires a specific start and finish-time, then you will go absolutely crazy. I am sure you have been to many Persian concerts or events and have noticed that it never starts or ends on-time. We all complain about it but will go again next month or next year. The story would be totally different if the dinner party was at a non-Iranian household, or if the event was organized by a non-Iranian promoter. So what is it?  Is it the organizers or is it the attendees? This is a tough one; it really is a catch-22, and I am afraid we will be in this vicious circle for a long time.

What makes us be late? Is it a cultural thing, (lack of) confidence or is it just OK to be ‘fashionably late’? Fashionably late means that you are showing the host/ess and other guests at the parties that you are not desperate for something to do, therefore, you show up a little late. It’s a polite way of saying “you’re late”… but you ‘meant’ to be, so instead of saying you’re sorry, you just say that you are fashionably late. Is it because if you arrive exactly on time you might be the first one there, and that can be awkward sometimes? If you arrive late, there will be people there already and more conversations to join in, plus, they can all see you walk in and admire your stunning outfit!

All around the world, the pace of life is relative. At first glance, you might think the concept of time is the same everywhere. After all, aren’t 90 seconds the same in Berlin or Beijing? What is important, however, are subjective attitudes toward time. The question isn’t, “Aren’t 90 seconds the same everywhere?” but rather, “Are attitudes toward those 90 seconds the same?” And the answer is an emphatic, No. Perceptions of time vary widely in different cultures. If you don’t believe that, try being 60 seconds late to appointments in Berlin and Beijing. In the latter city, it probably won’t be noticed. But in Berlin, you’ve insulted your contact.

Most countries, cultures, or societies, can be associated with a pace that can be described as either comparatively fast or slow.  Here in America, everything is rushed and fast-paced most of the time; in other places, such as Iran and most of the Middle East, the pace is slow and tranquil. The problem for us Iranians living in the West is the pace of our society-within-a-society is a mixture of both and shifts between the two extremes.

Studies have found that Japan and a collection of Western European countries had the fastest pace. The United States also tends to come in as an extremely fast-paced country—in many cases competing with Japan for the fastest pace.  Although Italy tends to be placed among the faster paced countries, it too has been regarded as a slower-paced country by some, when compared to its fellow Western European neighbors. Greece is another European country that most people consider, without question, to be slow-paced. In many areas (including most of Southern Europe, Latin America, Africa, and the Middle East), time is a servant, not a master. The idea that a person should be ruled by the clock is amusing. In these countries, it’s fine if a person is on time. But it’s also fine if a person is late. After all, life is complex and many things happen.

It is impossible to say which way of looking at time is correct. Both are appropriate–in their own environments. As time goes on, slower-paced countries and cultures are harder and harder to find. Of the  two lifestyles, which kind of pace do you think your world runs on? Which pace would you rather it ran on? I know what I want,  and I know there are more and more aspects of cross-cultural time-keeping to consider . . . but I ‘m  out of time! My deadline to submit this article was two weeks ago but I am sure my Persian editors also know PDF very well.

Keep in mind that it is important to slow down every once in a while. A healthy balance of fast-pace and slower-pace may be key to a happier, healthier and more smoothly run daily life.