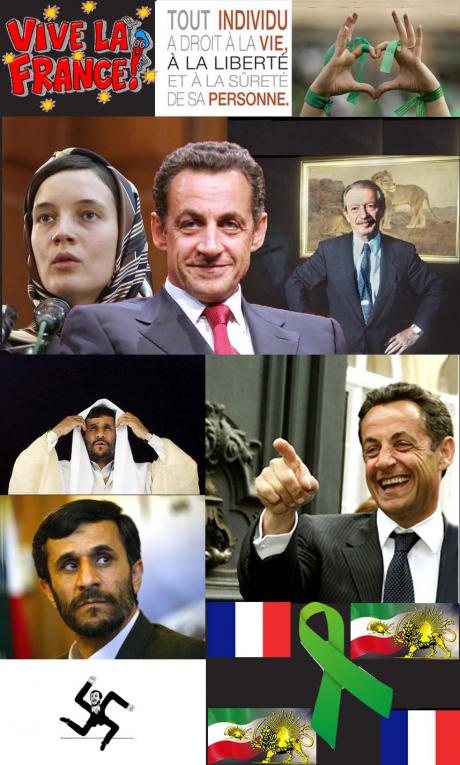 I have to say I was particularly worried about the news of an eventual exchange of French Student Clothild Reiss for Shapour Bakhtiar’s Assassin. Such an Exchange Would have Dishonored France. Instead Sarkozy Made one of His Finest Comments on the Iranian People’s Struggle on National Television. I say this all the more comfortably that I did not vote for Him ( But for Segolene Royal)  ;0)

To Equate the crime of an Assassin like Ali Vakili Rad to an innocent Student, Clotild Reiss, ridiculously accused of Spying in Iran for Foreign Powers would have been an endorsement of such accusations but also an insult to the universal values of Justice and Human Rights to which France has often boasted to defend.

Listen to French Iranian Police in charge of Bakhtiar’s security explain How Bakhtiar Was Assassinated by IRI agents:

Clotild Reiss Is currently safely in the French Embassy and therefore on French Soil. For Ahmadinejad to demand that she should stay in Iran until France liberates Ali Vakili or any other person as a gesture of good will would be absolutely contradicting his own Judiciary which set her free on grounds that the televised Trial was not enough.

I wish Clotild will be able to leave the country and come to France in a near future nevertheless !

Sarkozy’s Staunch Support for the Iranian Democracy Movement known as the Green Movement was demonstrated from the Very start of the protests and violent clampdown on Iranians after the elections. The Green Petition that was unfolded in Paris at the Champs de Mars was also warmly greeted in France. And Sarkozy’s government honored such people as Shirine Ebadi ( Greeted by Bernard Kouchner regularly when she comes to Paris ) and Simin Behbahani ( who was awarded the Simone De Beauvoir Award in Presence of Sarkozy’s former Minister of Culture Christine Albanel. )

My Humble BUT FIRM Opinion,