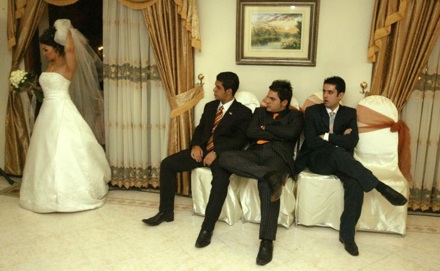 I was at a party when I was rushed to the roof of the building to save this beautiful Iranian woman who wanted to jump because another lady in the party was wearing the same exact dress as her.

“Don’t jump!” I screamed as I finished my beer and hid the empty bottle behind the air conditioner as you’re supposed to.

“Give me one good reason,” she said as she gave me a sad, distraught look.

“Look, I didn’t think there would be a quiz when I was volunteered to come up here to play suicide prevention or else I would have studied. I can’t think of a good reason. Can I give you 2 bad reasons instead?”

“Life is meaningless now,” she looked somberly away again. “I have to do this.”

“But, why?” I looked at my watch wondering if dinner was being served yet.

“You just don’t understand,” she shook her head from side to side. She had nice earrings.

“But don’t you see??? I want to understand.” I shook my head from side to side. I didn’t have nice earrings.

“I can’t teach you stuff you wouldn’t understand.” She had a point.

“Is that a movie line, Jennifer?” I didn’t have a point.

“Jennifer?” She looked puzzled. “Who’s Jennifer? This is Javaher. I think you’re on the wrong rooftop.”

“My bad. I have a problem with names. But I still want to understand.”

“So I’m not perfect. But enough about me, let’s talk about your jump. Think of your family. Have you written a will? Have you taken care of all your bills? Have you paid the bill for the will? Did you make the funeral arrangements ahead of time? Do you know what it costs these days to arrange a basic funeral?”

“I hate you.” She had nice legs. I wondered if they were serving leg of lamb downstairs.

“What did I do? I just got here and we don’t know each other. I don’t believe I have had a chance to prove myself worthless yet.”

“It doesn’t matter… I hate you anyway because you’re a man… Men would never understand anything they’re supposed to.”

“Dammit, there are so many other examples… Such as, do you ever appreciate what it takes to look like this, all perfect and ready for the cover of Vogue? Do you think it just happens?”

“I suspect there is a lot of hard work involved… I assume there is a large supporting cast, that more than one can of hair spray is used up, that everything had to be planned a year in advance, such as you bought those shoes on January 2nd and built that whole outfit around it over the next few months and so it upsets you that another woman wore the same thing and blew all your hard work.”

“That’s actually not bad. Are you one of those guys who make it a career out of learning what women want so they can get into their pants?”

“I don’t want women’s pants. I got my own pants. But I got a beef with you women. You say guys are skirt-chasers, but then you accuse them of wanting into your pants. It makes no sense. You were wearing a skirt a minute ago. When did the pants get into the picture? Do you take off the skirt and put on the pants and then accuse the guy of trying to get into them?”

“You’re losing me. Look, this is not about you. This is about me. Because, let’s face it, who’s really jumping, you or me?”

“I see your point.” I wondered if I was missing the dessert now.

“Then be quiet and let me rant. So are you one of those men who were given a book on reading women’s minds as a back-handed present by the woman of their lives and end up reading the book because there is no other reading material in the bathroom?”

“No. I’m one of those men who learn a lot of stuff that they don’t really want to through being with women. Like when they’re off to a party, he is all ready and good, waiting over an hour for her in the car while she keeps saying ‘I’ll be there in a minute’ and we both know well that she’s still trying on everything in her wardrobe.”

“There you go ranting again. I think you really need to be up here jumping with me. ”

“Oh no, I don’t want to steal your thunder. Carry on please. I’ll just watch. Hey, how about I hook you up with one of my loser friends who have children from both a previous and a future marriage? Would you then come on down so that I’ll be a hero for saving you?”

“Is he good looking?”

“He imports basmati rice and sells it to Costco, wholesale.”

“Give me a hand, I’m coming down. And move it because they are serving the akbar-mashty downstairs right about now.”