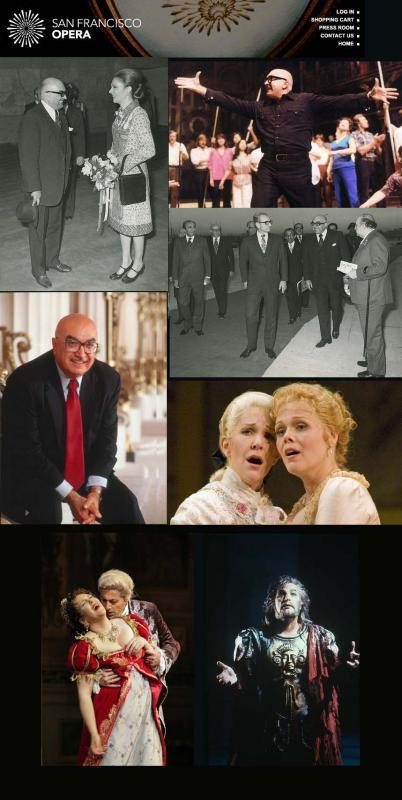 Iranian-born opera director and manager Lotfi Mansouri was General Director of the Canadian Opera Company and of the San Francisco Opera from 1988 through 2001. In 1992 he became a Chevalier of France’s Ordre des Arts et des Lettres, and the subject of a 1998 biography. He introduced opera surtitles — projected subtitles above the stage that allow the audience to follow the libretto during the performance.

He was born in Tehran, Iran, the son of Hassan and Mehri (Jalili) Mansouri. He married Marjorie Anne Thompson, Sept. 18, 1954; he has a daughter Shireen Melinda. Mansouri studied psychology at the University of California, Los Angeles (A.B., 1953) and was assistant professor there (1957–60). He began his directorial career with a production of Cosi fan tutte at Los Angeles City College, and several musical theater productions at Marymount College. From 1960 to 1966, he worked as a resident stage director at the Zurich Opera. In his first year there, he staged new productions of Amahl and the Night Visitors, La traviata, Don Pasquale, and Samson et Dalila. From 1966 through 1976 he worked as the head stage director at the Geneva Opera. Throughout this period, he occasionally worked at numerous U.S. opera houses, including the Metropolitan Opera and many smaller companies.

Among his productions available on DVD, are La fille du régiment (with Beverly Sills, 1974) and L’africaine (with Shirley Verrett and Plácido Domingo, 1988).

From 1971 through 1988 Mansouri worked as the general director of the Canadian Opera Company in Toronto. Mansouri introduced supertitles for the January 1983 staging of Elektra, and this is generally regarded as the first use of such a translation system.

In 1988, Mansouri become the fourth general director of the San Francisco Opera, replacing Terence A. McEwen.

Mansouri lead the company in commissioning several new works which have received critical acclaim, including John Adams‘ The Death of Klinghoffer (1992), Conrad Susa‘s The Dangerous Liaisons (Fall 1994), Stewart Wallace‘s Harvey Milk (1996) (co-commissioned with Houston Grand Opera and New York City Opera), André Previn‘s A Streetcar Named Desire (Fall 1998), and Jake Heggie‘s Dead Man Walking (Fall 2000). This move has helped build the house’s reputation as one of the leading innovators in the United States, a reputation which is still held today.

Towards the end of the 2001 season, Mansouri announced his resignation and was succeeded by Pamela Rosenberg, formerly of the Stuttgart Opera.