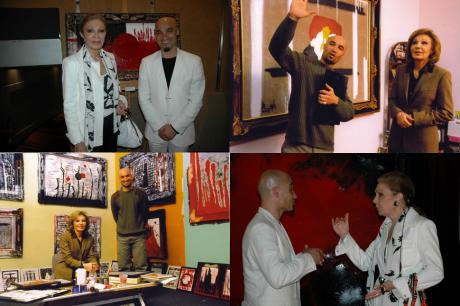 Shahbanou Farah Pahlavi with Paris-New York based Iranian painter Ghass Rouzkhosh known as Ghass. Ghass’ work is partly based on his personal experiences as a soldier during the devastating Iran-Iraq war. Ghass limits himself to three symbolic colours – red, black and white – and incorporates the picture frame into the painting. Born on March 21st 1964 in Shiraz, Iran, Ghass Rouzkhosh started to paint at the tender age of 8. In 1979 when he was just 15 years old, the Islamic revolution took place and the Iran-Iraq conflict wasn’t far behind.Having lived 8 years of war, two of which he spent fighting on the front-line, his vision of the world was to change forever. The cruel and indelible images which were imprinted on his mind now play an important role in his art.

He uses three colours only; red which is inspired from the the skies following a bombing, black which brings back memories of the charred remains of trees, and white which remains the colour of peace and innocence.

Paris-New York based Iranian painter Ghass addresses contemporary cultural and geopolitical issues through his work. In tackling complex questions, and referring to his personal experiences as a soldier during the devastating Iran-Iraq war, Ghass limits himself to three symbolic colours – red, black and white – and incorporates the picture frame into the painting.

Ghass’s work is about more than method: he has a remarkable ability to take a pre-determined set of conditions, to extract the essence of colour and meaning, and to discard the rest. His powerful, sometimes three-dimensional paintings evoke both fascination and malaise.

Born in Iran in 1964, Ghass has been an artist for 26 years. He was a soldier for two years during the eight-year Iran-Iraq war, and his vision of society was transformed by the painful experience of conflict.

For the past 16 years, Ghass has used only three colours: red, black and white, unadulterated. The colour the sky takes on after a bombing inspired his use of red, and the charred trees inspired the black.

When asked about his paintings, Ghass states, “I don’t do nice paintings. I want to give a voice to those who cannot speak, because suffering belongs to everyone.” He explores the clash between culture, religion, economy and politics, using recognizable religious images or cultural iconography as his subjects. His paintings return to a forgotten debate within art theory and practice, that of how ethics relate to aesthetics.

Ghass works more than 20 hours per day, always renewing the limits of visual expression. He manages to convey the transition from war to art and the terrifying echoes of violence through a narrow field of expression.

Besides the pre-determined use of colour, the paintings present other common traits: a rejection of traditional standards of composition and design; and a simultaneously tense yet playful presentation of objects in a primitive manner, which communicate a sense of inner disturbance.

In May 2007, a book dedicated to Ghass’ oeuvre and life was launched with a foreword by Her Majesty the Empress Farah Pahlavi.