EMPRESS OF THE ARTS: Farah Pahlavi and Mary Apick at “Beneath The Veil” JFK Center (Oct 8th, 2009) 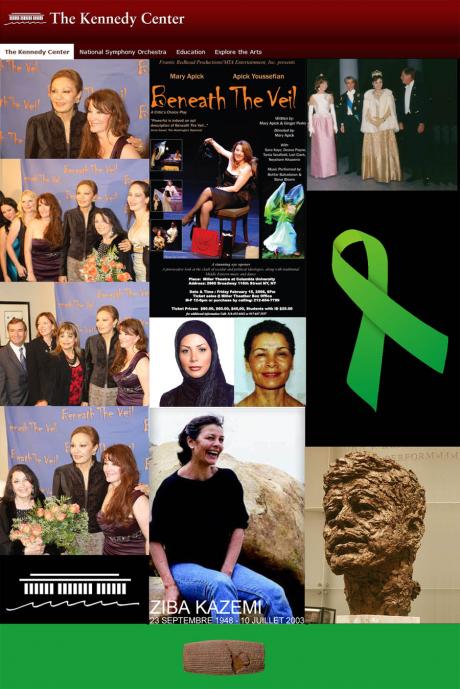 Her Majesty Shahbanou Farah Pahlavi and Award Winning Actress and Human Rights activist Mary Apick at the presentation of the Critic’s choice play “Beneath The Veil” at the John F. Kennedy Center for the Performing Arts in Washington DC on October 8th, 2009

Advertising Clip of Play : Beneath the Veil:

At 7:30 PM on October 8, 2009, the Critic’s Choice play, Beneath the Veil, had its encore presentation at the Kennedy Center in Washington, DC. And the return engagement of this intense, eye-opening play about life beneath the veil was another smashing success. Beneath the Veil deals with the oppression of women and girls in various parts of the Middle East, especially Iran. And with all that is going on in Iran at this time, the play was more relevant and important than ever. This performance was dedicated to the memory of Neda, and presented in support of all the other Iranians who continue to risk their lives for freedom and true democracy in their country.
In attendance was Her Majesty, Empress Farah Pahlavi of Iran, who flew in from Paris for the second time to be there in support of the cause. Producer, star of the show, Internationally Award Winning Actress and human rights activist, Mary Apick, in her opening comments gave a warm welcome to Her Majesty, stating that the Empress, “Who I first saw and admired as a child, is a woman who is both soft and powerful, visionary and decisive, gracious and spiritual. She is a champion of the arts, and after all these years, even though we live on opposite sides of the ocean, both in exile from the country of our birth, it is an honor and a pleasure to come together with her again in the theater.”

Among the many other dignitaries and honored guests in attendance were: US Congressman Ed Royce – Honorable Director Bijan Kian of the Export-Import Bank of the United States – Alyse Nelson Bloom, President of Vital Voices Global Partnership – Layli Miller-Muro, Executive Director of the Tahirih Justice Center – Cindy Andreotti, former Vice President of MCI – Rudi Bakhtiar, the internationally known journalist, formerly of CNN, was the Honorary Chair for the event and delivered the opening remarks. – Timothy Higdon, Deputy Executive Director for External Affairs at Amnesty International, gave an impassioned speech about the recent executions in Iran.
And then the play began, and the power of the stories and their message brought tears to the eyes of many, including several men in the audience. Mary Apick and the rest of the cast received a well-deserved ten-minute standing ovation at the end. After the show, the Young African-American Drumming Musicians, who were waiting in front of the Kennedy Center, accompanied the VIP guests to the After Party, which was held at the nearby 600 Restaurant at the Watergate. There, on the red carpet, the press had a photo opportunity with the cast, the Empress, and the other dignitaries, and then everyone had a chance to celebrate and to discuss the themes of the show with Mary and the rest of the cast. It was another beautiful presentation of a riveting and very important play.

Mary Apick on VOA Shabahang speaks about Art and Artists Confronted to the Islamic Revolution:

Mary Apick (born in Tehran, Iran), 1954 is an award-winning Iranian actress, writer, and producer. She is an ethnic Armenian. She was the first Iranian and Asian woman to win the Best Actress Award from the Moscow International Film Festival. She won the award for her 1977 performance in Dead End, written and directed by Parviz Sayyad.