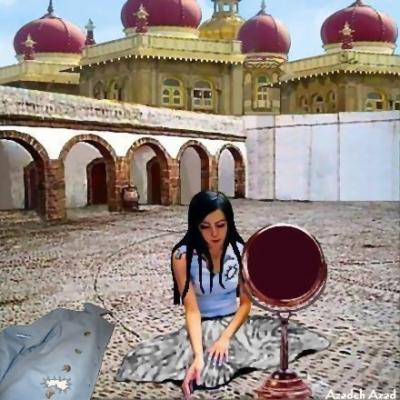 When I left the Prince’s palace carrying a bag of silver coins from the Queen, I shifted back to the shape of the Luminous Old Woman and headed home to my beloved daughter, Torange.

The Queen and her consort were puzzled as to who could make an amulet mirror chain and where they could find such a person. They sent the town crier to the snowy streets and alleys and tea-houses to announce that whoever knew how to make a pure mirror chain was invited to make one for the Prince and receive a generous reward. When Torange heard the news, she asked me to go to the blue palace and tell the court that she knew how to make one, but they had to put at her disposal a pure, round and perfectly flat standing mirror as well as the use of a large, vacant courtyard.

I went to the court and told the Queen of my daughter Torange’s ability to create a healing mirror chain. The Queen offered me a pure, round and flat standing mirror and the key to an empty courtyard used for assembling horses and riders and which happened to be located right beside her son’s palace. She also made sure that the Prince knew of this healing ritual and convinced him to leave his palace’s gloomy retreat for its many-windowed upstairs hall to watch the chain-making performance.

On a surprisingly warm late winter’s day, Torange opened the rusty gate of the empty courtyard and entered it carrying the pure mirror. The Queen, her consort, their courtiers and the servants all stood on the terrace of the Prince’s palace and watched the ceremony. Mehrbun also watched discreetly from behind the lace curtains of his window. He knew that only a pure, flat mirror could bear a reflection of the soul and be a telling tool for performing healing rituals, that only such a rare mirror could show the ultimate truth. So, he was curious as to how the Luminous Old Woman’s daughter with a familiar face but in tattered clothes would make a mirror chain that was supposed to remedy his inner turmoil.

Before long, Torange stood the large mirror upright, sat cross-legged on the cobblestone floor, stared into the mirror, cleared her voice and began singing the tune of her life story. It was the life story of an Orange ‘n’ Torange Girl who lived, like hundreds of her sisters, inside a torange in the Orange ‘n’ Torange Orchard in Pariestân on top of Mount Qâf. As the Orchard was occupied by depraved Deevs, like her sisters, she was not allowed to leave its confines at all nor the confines of her fruit after nightfall. But it was the Deevs’ wretched presence itself that crushed her heart the most to despair. Until, one day a Prince showed up on a winged black horse, took her out of the prison of the besieged Orchard and then made all the right moves for her to free herself from between the thick walls of her torange.

The Prince listened and saw in the mirror the images of what the girl was revealing. His eyes grew tender and glistened. The girl sang in colourful detail the story of her encounter with the Prince, the murderous girl and the Luminous Old Woman, while the Prince watched everything in the pure mirror. After every detail of each episode and anecdote, the girl dipped her fingers into the mirror and pulled out a mirror-bead that was immortalised by the light of its own shining. She threaded the beads onto a string until she finished both her story and the making of a mirror chain, a shimmering amulet. While the beaming chain was being created bead by bead, the Prince’s spirit quickened and his eyes became alive like a child’s at the season’s first snowflake. Earlier on he had realised who the girl in tattered clothes really was. So at last, he was able to lay the swords of his nightmares to rest.

Throwing off sadness as if it were an ill-fitting shirt, Mehrbun headed down the stairs and ran out of his palace to the neighbouring courtyard; there he held Torange in his arms and did not let go of her for fear of losing her again. He was finally whole and at home with himself.

“You are the absence I thought I would never fill,” he said. “I am sorry for all the trouble and hard times I put you through. I decided to leave you in the willow tree because I was focused on the single, tiny intent of fetching clothes for you. I did not listen to you, I did not try to look at the world from your point of view. I tore the sunshine into shreds and took both of us into darkness. However, my pain of separation from you awakened me to my selfishness and rigidity and made a better man out of me. I think I have learnt the way to be true to my namesake.”

Torange broke into a smile of delight, placed the mirror chain around the Prince’s neck and held both his hands.

“The world is but a passing place within lovers’ rhyme,” said Torange. “When everything finally comes to fruition, we are free of the painful past, and then with love we return home to each other’s bosoms. Let us celebrate our becoming; yours, through suffering and poetry-making; mine, through keeping hope and clay-making in celebration of Earth, Love and Women, under the protection of my new guardian angel, Spandârmaz, to whom my adopted mother has introduced me. Will you join me now in the journey to the place where couples make life magic with open flesh, arts and words?”ّ

The Prince smiled on her and together they moved their bodies to the rhythm of a meandering walk to their palace so they could hear the winter songbirds and feel the cool breeze on their faces. The Queen, her consort and everyone in their entourage were astonished by the unbelievable change in the Prince and were glad to see him happy and reunited with his beloved.

As soon as the couple stepped into the main hall of the palace, the news came that the Prince’s wife had been found dead in her chamber. Everyone hurried to see the dead woman. First, Torange and Mehrbun forgave her for her wickedness. Next, I bent over her body, opened her eyelids with my thumbs, saw all the worming shocks from Torange’s words in the depths of her eyes, and declared her cause of death to be an overdose of Committed Cruelty Unveiled. Then, I seized her hovering soul, shrunk it to the shape and size of a small-minded bead and added it neatly into Mehrbun’s mirror chain. Now, in constant contact with the skin of her widower ex-husband, the wicked girl’s psyche would constantly have to listen to Torange’s story over and over again until she would drift into the thought of a pearl’s journey and begin to shine.

Three days after the burial of the imposter wife, the royal household turned into a frenzy of joy and a fun circus in preparation of the party for Torange and Mehrbun’s free union on the Spandârmaz Day, Persian Valentine’s Day, Day of the Guardian Angel of Earth and Love and Women. When the day arrived, the lovers exchanged rings and celebrated their loving bond by a tea and sweetmeat party. On the same day, following an ancient Persian tradition, women set aside their household chores and made their men do the entire housework by themselves, while the men presented them with gifts. However, Mehrbun and Torange vowed to share the household chores so equally between the two of them that there would be no need for one day of compensation of guilt. They decided that flowers and gifts offering would be sufficiently wonderful.

Several days later, the Prince sent for me to ask me to become his healing teacher. When I met with him, he was excited at having found his life’s calling.

“I have ridden and flown and walked through my journey of transformation,” he said. “I feel I have been reborn from my six-month long dungeon of despair as a renewed person with new reasons for being and interacting within the world. And Torange’s storytelling has sealed my transformation. I have chosen to become a healer and a helper to those in need. I want to reach deeply into the centre of my inner being and take full responsibility for my calling as a healer. For that, I need your knowledge and wisdom.”

I spent twelve months guiding the young man in the art of healing the distressed and the redeeming power of imagination and storytelling as forces of inner change. Upon finishing his training, the Prince abdicated his royal title and, with encouragement from Torange, chose a simple life-style with his beloved in a little cottage on the bank of the stream that passed through the city. He turned his palace into a centre for the arts and healing, where they made a living, he as a healer-storyteller and Torange, as a sculptor-singer. They worked in the company of other healers, artists and counsellors of the vicinity.

When the Spring Equinox arrived, it was time for me to leave. Mehrbun, now a simple citizen, asked me to be the eminent-gris overseer of his centre. I declined his offer as I had to be the sounding board in the life’s journey of others. After saying my good-byes to everyone, I turned back into my usual Mother Simorq self and flew away behind the Mount Qâf to spread hope, purpose and maps upon the wild, exploding universe.