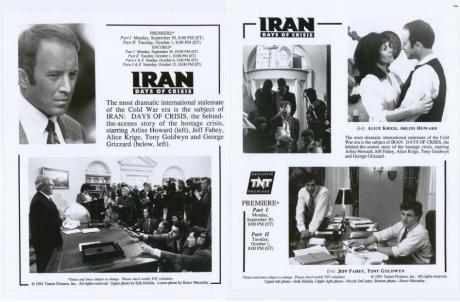 A Canadian TV Series Iran: Days of Crisis about 60 American hostages in Iran in 1979, the nation and the hostages’ families were plunged into a political and emotional whirlpool. Focusing on hostage John Limbert and his Iranian-born wife, this drama provides a look at the personal side of this international event.

More on The Film Here

AVAILABLE ONLY ON VHS on Amazon.com

From early 1981, here is a CBS News Report with Walter Cronkite, on the U.S. hostages being freed from Iran!

Khamenei, American hostage ( John Limbert held hostage at US Embassy is visited by Ayatollah Khamenei, then part of the Islamic Leadership close to the Leader of the Revolution, Ayatollah Khomeiny)