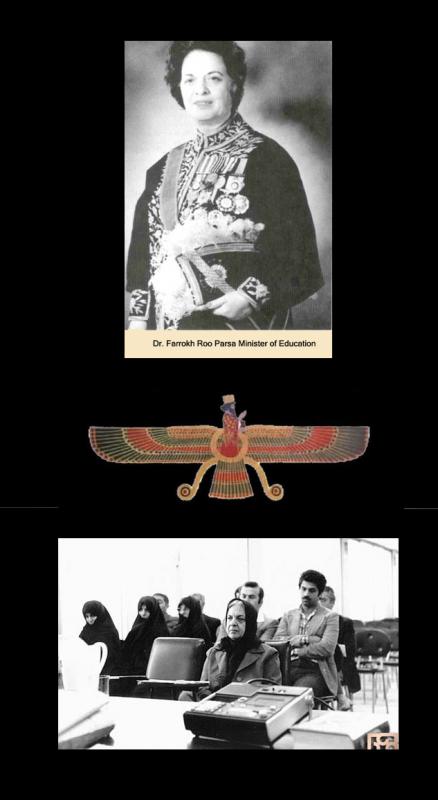 Farokhroo Pārsā was the minister of education in the second and third cabinet of Amir-Abbas Hoveida. She became a minister in 1968. Pārsā was an outspoken supporter of women’s rights in Iran,  After the Revolution in Iran, she was tried and found guilty [by a “revolutionary court”] of financial corruption and spreading moral corruption through prostitution in the ministry while it was under her guidance. She was finally executed by a Fire Squad, apparently after weeks of physical torture ( including being put in a plastic bag and kicked by her male wardens) on May 8, 1980.

During her term as the Secretary of Education:

In her last letter from prison, Farrokhroo Pārsā wrote to her children:

“I am a doctor, so I have no fear of death. Death is only a moment and no more. I am prepared to receive death with open arms rather than live in shame by being forced to be veiled. I am not going to bow to those who expect me to express regret for fifty years of my efforts for equality between men and women. I am not prepared to wear the chador and step back in history.”

A Women for All Seasons: In Memory of Farokhroo Pārsā by Ardavan Bahrami

BOOK: EVEN AFTER ALL THIS TIME By Afschineh Latifi ( A Memoir )

The Generals Widow By Cyrus KADIVAR

Dialogue of murder:A cautionary tale that must not be forgotten By Cyrus KADIVAR