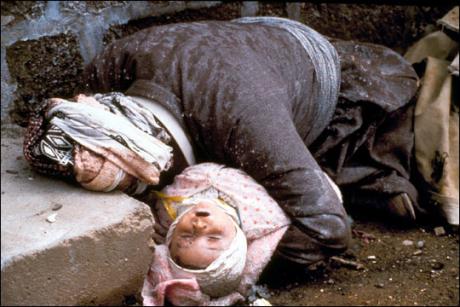 Western journalists taken to scene of chemical attack by Iranian Occupying Forces in Iraqi Kurdistan and shown hundreds of bodies.  Iraq has been accused of attacking their own people with cyanide gas as most of the dead are Kurds who are fighting for an independent Kurdistan and have sided with Iran in the Gulf war. Now the Region in Iraq is under Iranian occupation so when Journalists aim to ask questions to the Iraqi Prisoners of War about the use of Chemical weapons ( forbidden by the Geneva Convention), they are halted by the Iranian authorities to ask Any further questions.