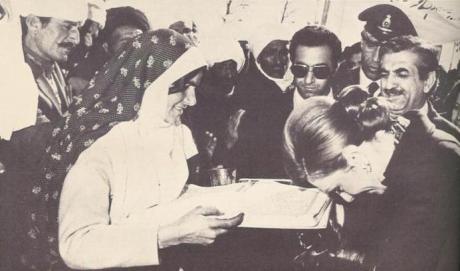 As Queen of a Shi’it Nation, Shahbanou Farah of Iran visits the Sunni Minority in Sistan and Baloutchestan Province of Iran nd pays her respect to their Sunni Mus’haf version of the Holy Koran. (circa 1970’s)

The historic background of the Sunni–Shia split lies in the schism that occurred when the Islamic prophet Muhammad died in the year 632(AD), leading to a dispute over succession to Muhammad as a caliph of the Islamic community spread across various parts of the world.

Over the years Sunni-Shī‘ah relations have been marked by both cooperation and conflict, with conflict predominating. A period of relative harmony during most of the twentieth century has been replaced by conflict.[1][2] Today there are differences in religious practice, traditions and customs as well as religious belief.

Numerous Baloch tribes, an Iranian people, moved into the area from the west in the 11th century to escape the Seljuk Turks. Western Baluchistan was conquered by Iran in the 19th century, and its boundary was fixed in 1872. Omani influence waned in the east and Oman‘s last possession, Gwadar, was bought by Pakistan in 1958. In 1998, Pakistan conducted nuclear tests in the Pakistani province of Baluchistan.

PS: Not being an expert on Islam or differences between Shia and Sunni Traditions or Readings of the Koran any Feedback or Corrections from Scholars or knowledgable Readers will be appreciated.

ROYALTY AND THE PEOPLE: Farah Greeted affectionately by girls in Luristan Province (1975)

ROYALTY AND THE PEOPLE: Farah and Quashgai Kids (1976)

ROYALTY AND THE PEOPLE: Shah and Soraya Share meal with worksman’s family (1956)