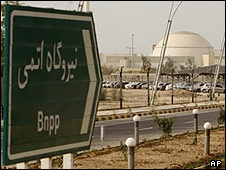 Following a decades long shameful practice of dragging out the opening of Bushehr Nuclear Power Plant (BNPP) in spite of hefty cash payments and commercial concessions from Iran’s rulers, the Russian Energy Minister announced on November 16, 2009 that it has again postponed the opening of BNPP and will not do so any time soon! This latest sham is coming after the billions of dollars the Russians have extorted from a regime in need of legitimacy and phony technological achievements at any cost!!

This again reveals the painful truth about Iran’s nuclear technology and the lies and claims Iran’s ruling mafia makes to the people of Iran!

Iran’s claimed nuclear progress may as well have come from a 13-year-old’s kitchen table (as Ahmadinejad claimed a couple of years ago) because they obviously don’t have a lot of the technology they claim to have achieved!

News reports like this latest snub from the Russians and the fact that Iranian regime is accepting to even talk about exchanging uranium to be enriched abroad shows how overstated and bogus the talk of Iran’s nuclear technological progress has been, especilly in two key areas:

1- Apparently Iran’s nuclear capabilities are far from completing a nuclear fuel cycle because the recent discussions show that Iran is still unable to process raw Uranium ore (convert it into yellow cake) on industrial scale! That is why they are hesitant to trust the West and lose the stockpile of lower grade enriched uranium they have because they are afraid they won’t be able to buy any more yellow cake to keep their centrifuges working! It turns out that all of the yellow cake they have so far been processing and enriching had come from abroad in a purchase made in the last decade from Africa and elsewhere (not sure about the source, but I believe it came from Africa)!

2- All of the back and forth with Russians about the opening date for BNPP is also indicative of Iran’s complete reliance on foreign technology when it comes to industrial scale nuclear facilities!