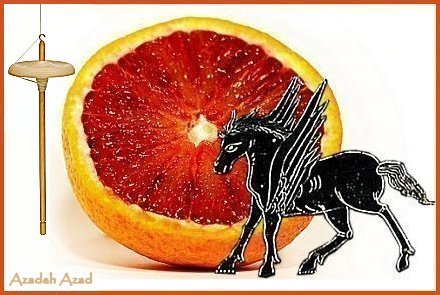 So, she let the Prince know that she wanted to have a new wooden platform for their bed and then she called a carpenter. She ordered the man to pull out the torange tree along with its roots and take it to his workshop to build the platform for the couple’s bed. The carpenter did what he was told. However, when it came time to put his saw to work and make lumber out of the tree, he heard a groaning voice coming from inside it. Apprehensive, he decided to take a break for a little while before finishing the job.

Around the same time, I was walking in the city’s bazaar in the form of the Luminous Old Woman on a mission to guide some other mortals. I remembered needing a new drop-spindle. I entered the carpenter’s workshop, cut the head off the tree stalk and took it home where I made a spindle out of it. I already had one, but was concerned that it was gradually wearing out. I put the new drop-spindle aside in my closet until it was needed.

A few days later, I returned home from running errands to find unusual clay figurines and sculptural forms displayed all over my room. I was very surprised. I wondered who had done this, who had found my slabs of clay! Another day when I returned home, I saw more clay works. Sculptures of Deevs and trees, people and pensive paries, were placed on the mantelpiece beside my gathering basket and bags of medicinal herbs. I spotted other sculptures on my wall-to-wall bookshelves and in many corners of my little cottage, even in the front garden between the plants. I wondered if this lovely, earthy and womanly art was done by Spandârmaz, the Guardian Angel of Earth and Love and Women. So, I decided to do some detective work and find out who my new house-mate was.

One morning, I spent a long time getting dressed and combing my hair to show the invisible entity that I was preparing to go out. Then, I busied myself with the main door, pretending to lock it. Instead of leaving the front yard, I hid behind some bushes in the garden. An hour later, I heard a noise from inside the house. Slowly I tiptoed to the corridor, peered into the living-room and noticed a most lively girl working with clay and adobe on the kitchen counter, making intriguing and unique pieces. When the girl saw me, she was startled and shocked.

I held her hands and invited her to sit down with me. I offered her tea and listened to her. She said she was the Orange ‘n’ Torange Girl and then she told me her life story up to the point where she woke up from slumber to find herself living inside a spindle. She said she cracked the spindle open, pushed her way out of it like a butterfly out of the cocoon, and spent most of her time between my closet and my clay work table. She finished by voicing her wish to do more clay sculpturing to give expression to her horrific experiences with the Deevs and the murderous girl, to overcome her nightmares and her longing for the Prince.

I liked Torange so much that I took her as my daughter. I felt so happy about it. Torange and I spent a lot of time together, working side by side in silence, listening to the whispers of the Human world behind the windows. I kept spinning fibers of life with my drop-spindle, twisting them into a long, continuous strand of dreams, relying on my hopeful finger-twisting and loving pull by Mother-Earth. Torange kept making clay statues out of the memories of her long captivity by the Deevs and her slaying by a wicked Human, hoping the tightness in her chest would ease and the knife scar on her throat would fast fade away.

Once a week, I accompanied her to a craftsman’s workshop to fire her works in its kilns. She sold her sculptures in the main bazaar and thus provided for both of us by means of her skill. Every evening, after supper, we revelled in cosy chats and laughed over jasmine black tea from my samovar. Then I prepared my qalyan (hookah) and puffed on it for an hour, while Torange devoured one of my books of adventures in her bed before falling asleep.

On the other side of the city, in the Prince’s palace, as soon as the torange tree disappeared and the Prince became completely convinced that he would never see a change in his wife, he began feeling sadder and lonelier each day. Ultimately, his sadness was tinged with indignation at a turn of events that he could neither comprehend nor control. He had stopped speaking to his wicked wife, had moved down to the underground sanctuary of his palace where he locked himself in a dark room with only a mattress on the floor and no windows.

For weeks on end, under the watchful eyes of discreet servants, he lay in bed in a fetal position, shrunken and twisted, with agonising flames in his veins and a tormented mind. He had begun reciting poems aloud to himself and to the walls as he composed them on the spot. He fondled the words over and over in his mind, not eating and not wishing to see anyone. Devoured by the monster of melancholy, he lived withdrawn in the underground room for six months.

I was beginning to be on pins and needles about the Prince when the Queen showed her impeccable timing by sending for the best healers in town. I shape-shifted into a gypsy healer with a patch over one eye, a medicine woman in billowing skirts, paisley shawl and jingling anklets, and presented myself to the Queen as the famed One-eyed Kowli.

I followed the distressed Queen on a long walk to Mehrbun’s palace and we slowly made our way down to Prince’s underground hideout. I knocked on his door, but could not convince him to see me. So, I told his royal mother that the only effective course of action would be to find someone who could make a pure mirror chain for the Prince to wear in order for his soul to heal and to enjoy an empathic participation in life.

When I left the Prince’s palace carrying a bag of silver coins from the Queen, I shifted back to the shape of the Luminous Old Woman and headed home to my beloved daughter, Torange.

The Queen and her consort were puzzled as to who could make an amulet mirror chain and where they could find such a person. They sent the town crier to the snowy streets and alleys and tea-houses to announce that whoever knew how to make a pure mirror chain was invited to make one for the Prince and receive a generous reward. When Torange heard the news, she asked me to go to the blue palace and tell the court that she knew how to make one, but they had to put at her disposal a pure, round and perfectly flat standing mirror as well as the use of a large, vacant courtyard.

I went to the court and told the Queen of my daughter Torange’s ability to create a healing mirror chain. The Queen offered me a pure, round and flat standing mirror and the key to an empty courtyard used for assembling horses and riders and which happened to be located right beside her son’s palace. She also made sure that the Prince knew of this healing ritual and convinced him to leave his palace’s gloomy retreat for its many-windowed upstairs hall to watch the chain-making performance.

On a surprisingly warm late winter’s day, Torange opened the rusty gate of the empty courtyard and entered it carrying the pure mirror. The Queen, her consort, their courtiers and the servants all stood on the terrace of the Prince’s palace and watched the ceremony. Mehrbun also watched discreetly from behind the lace curtains of his window.