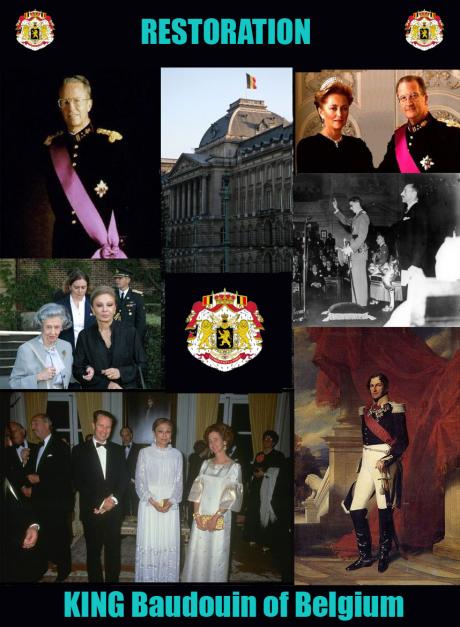 The Belgian Monarchy has maintained to this day a fragile stability over a linguistically divided nation. Upon his father’s abdication, Young Baudouin takes Oath in Parliment Amidst Cries in Favor of a Republic. It should be noted that Persia’s 1906 Constitution was drafted on the Belgian Constitution of the Time. Despite the Popularity of the Belgian Royal Family, Republican feelings questioning the utility of the monarchy re-emerge in the public debate. A Hoax by Belgian TV last year even went as far as claiming that Belgium had dissolved the monarchy after the division of Belgium in two due to a national uprising. The distasteful Joke worthy of Aprils Fools Day created a huge controversy throughout the country.

Baudouin (French: Baudouin Albert Charles Léopold Axel Marie Gustave de Belgique or Dutch: Boudewijn Albert Karel Leopold Axel Marie Gustaaf van België) (7 September 1930 – 31 July 1993) reigned as King of the Belgians, following his father’s abdication, from 1951 until his death in 1993. He was the eldest son of King Leopold III (1901-1983) and his first wife, Princess Astrid of Sweden (1905-1935). Having had no children, the crown passed on to his brother, Albert II of Belgium, upon his death. Baudouin is the French form of his name, the form most commonly used outside Belgium; his Dutch name is Boudewijn. Very rarely, his name is anglicized as Baldwin.

King Leopold III of Belgium Abdicates in Favor of his son Baudouin:

King Baudouin of Belgium takes Oath as King before the Parliament Amidst Republican Opposition ( Someone cries out Vive La Republique):