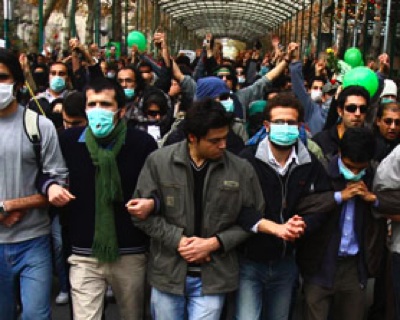 The military regime in Tehran is in its final days. The signs of an imminent collapse, perfectly traceable on the Iranian streets, are evading the most prominent Washington experts. The slogans on the walls, the nighttime chorus of Allah-o-akbar on the rooftops, the crowds chanting “death to the dictator,” all signaling a collective defiance despite the brutal backlash, and all reflecting a mass mobilization unseen since the 1979 revolution.

The recurring cycles of peaceful protests and state violence is part of a larger transformation sweeping through Iran. But in Washington, this magnificent collective action spurs only arrogant dismissal on the part of the Iran policy industry. Democratic revolutions have always been about idealism, selflessness and a passion for solidarity and freedom–all concepts entirely foreign to the pragmatic, conceitful, double-talking policy insiders.

It was not surprising that hours after millions of Iranians poured into the streets, mourning the loss of the country’s greatest dissident cleric, grand Ayatollah Montazeri, all that is heard from Washington are babbles about lack of leadership or a broad-based coalition among Iranian opposition. To Iranians, this is no big shock. Washington’s inability to read Iran accurately is reminiscent of it insisting on remaining loyal to the Shah when monarchy had all but been dismantled. But this revolution, as did the previous one, goes forward with the prospect of a final encounter between the state and revolutionaries looming ever larger.

The next several days in the month of Moharram, marking the sacred Shiia mourning days of Ashura and Tassua, will be detrimental for Iran. Traditionally, thousands of mourners take to the streets to grieve the slaying of the Shi’a Imam Hossein Ibn Ali, a martyr who was killed for refusing to obey the illegitimate ruler of his time in 680 AD. The coincidence of the shared names between the beloved martyr and the current leading opposition leader, Hossein, seems ironic to foreign observers, but to the revolutionary guard generals of Iran, it’s no less than a colossal disaster. In a recent statement, the guards have threatened to deal harshly with those who intend to defy them during the Ashura and Tassua, though even they know the hollowness of their own threats, especially in light of the events of Dec. 18, 2009.

On that day, the Guards had called for their supporters to rally. A week earlier, the opposition demonstrators had committed the ultimate act of defiance yet, by tearing the image of the founder of the Islamic Republic of Iran, Ayatollah Khomeini, into pieces before the rolling cameras. The opposition hunkered down, leaving the streets to the Guards and their supporters for the day, who had once managed to draw out millions. On Dec. 18, however, no more than 2,000 to 3,000answered the Guards’ call.

The significance of this failed show of support needs some further explanation. According to the numbers given by the Iranian regime in the past, the Revolutionary Guards comprise an estimated 120,000 active duty members and some 300,000 reservists. More than half have been traditionally placed in and around the capital. In the past, the regime effortlessly mobilized the reserves and their families.

Only a year ago, for the anniversary of the Islamic revolution, the state put on a convincing show for the foreign reporters and brought herds of people to the streets, by rounding up supporters in small towns and shuttling them to the capital and other major cities. Foreign correspondents and visiting peaceniks subsequently reported Iran’s regime stable and its president, Mahmoud Ahmadinejad, and his nuclear intentions as popular and popularly beheld.

But Dec. 18 was a watershed, revealing to the generals that they have been abandoned by their own faithfuls. Clearly, they can no longer win the streets with a disappearing base.

In the next few days, it is increasingly likely that the guards, faced with several hundred thousand peaceful mourners, will be unable to fire. The demonstrators, not the guards, will be in control of the streets, and their protest can take a different turn. This time, strategic locations such as the radio and television headquarters, the Ministry of Interior and the prisons are the places to watch. If the 1979 revolution had any lessons to heed for today’s demonstrators, it is that these are the last bastions to conquer for their victory to be complete.

In the meantime, the Iran policy cottage industry in America also needs to take note. If the United States is to ever have a place in Iran’s future, it cannot do so without reading the country properly. It is a literacy that can only begin by listening to the voices of the people.

Ramin Ahmadi is co-founder of the Iran Human Rights Documentation Center. This article was first published in www.Forbes.com.