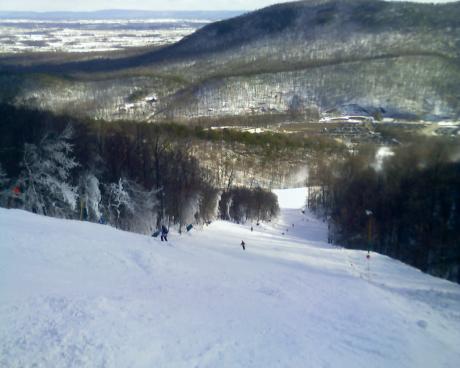 I learned to ski in these mountains – Dizin – back in mid 70s.  My father and I started skiing at the same time and we skied together for 3 years before I moved to America.  I love skiing and this is another gift my father has given me to cherish during my life.

I’ve since skied on and off since college and have picked it up again in the past few years.  This year I’m the best equipped I’ve ever been and after buying the pieces over the past few years I can really enjoy the quality these equipment provide for a good day at the slopes.

In the past either my boots hurt me or my jacket bought at Macy’s wouldn’t cut it or the skis felt flimsy, but not anymore!  Sometimes I feel guilty paying $25 for a pair of ski socks which are soft and oh so comfortable.  Then there are the boots for before and after skiing where you just want to slip your tired foot into it and don’t worry about tying any laces, the big bag to put your stuff in and the small items that you choose to buy for different purposes here and there.  All and all I’d say when I go skiing I carry about $1500 worth of clothing and equipment and to me it is money well spent after all these years 😉

Anyway, skiing is not just coming down the slopes.  It’s a whole day of spending time in beautiful winter, its peaceful white and the tranquility you feel when you’re up in the air on the lift chairs.  You take in the peace and forget your worries and think about anything and everything or nothing!  You talk to the people sharing the lift with you and in the minutes it takes you to get up to the mountain-top you share your simple thoughts and joys.

The other day it was cold and breezy but a sunny and beautiful day and it is days like these when good gear allows you more enjoyment knowing you are this comfortable in such a harsh environment.  In this particular day during my way up I was talking with my fellow skiers about what a nice day it is and then they asked me where I was from.

I’ve always been asked where I’m from and I always tell them I’m originally from Iran and learned skiing there and so on and so forth.  I don’t know if is my skiing (I ski well, not great but well) that maybe somehow different but for some reason they soon ask me where I’m from and this year they’re asking about politics and what I think about the protests in Iran.

I’m in a helmet with a separate face cover and goggles to protect against wind and have not talked enough to show any accent and they can’t see any part of my face or head, yet they want to know where I’m from and talk politics!  You see we Iranians have a writing on our foreheads that says we all have PhDs in politics and like nothing more than to talk about!  It is in our blood and we’re raised with it one way or another.  Of course if you don’t want that you can say you are Persian or from Persia and then they leave you alone!

So in this day it happened to me twice with 2 different sets of people which made me think about writing this blog.  The lift is only a few minutes and by the time you talk the niceties and weather there is only 2 or 3 minutes to explain the Iranian “situation”.  I can’t start from the beginning and say well once upon a time there was a Prince charming who had a big nose and loved kabob and women and then there was this evil bearded man …

I told this one group that to me it is very difficult to predict the near future of Iran and Iranian politics.  They wanted to know if I thought the protesters would be able to overthrow the Govt.  I told them I don’t know it is hard to say but the most important issue is to realize that the chickens have come home to roost.  Iran has come full circle and the protesters are the people who were born and raised under this regime and they’re now fed up with all the crap and limitations that they’ve been put through.  They voted en masse and their votes were stolen by a massive fraud.  So they’re angry and they want change.  I said it is sad to see them get beaten up but at some point they have to stand up against injustice otherwise nothing will ever change and it’ll get worse than ever.

I told them that they’ll eventually need someone to lead them somewhere and get more organized.  I told them perhaps like the Iranian woman who won the Nobel peace prize few years ago.  I also said the guy who lost the election has not folded yet and the other day they killed his nephew and he is still there condemning these crackdowns.  So I don’t know we’ll have to wait and see.  At this time one of the guys said we need a leader here too!  To which I and others laughed a bit.  He meant the healthcare fight and bailouts and other stuff that some protested but there wasn’t any leader to lead them properly against Obama.

Other than those 2 groups the rest of the day I didn’t talk politics to anyone.  The 2nd group asked me if women have to wear full veil and I said no just scarves.  I said a scarf is the minimum but some wear a full veil.   I said actually the women fought a lot for their rights such as having this minimum scarf and not the full veil and other restrictions and now Iranian men are joining the fight for more.

I spent the rest of the day reflecting and enjoying the day.  I truly don’t know what is in store for Iranians.  We see the youtube videos just like Iranians inside Iran see the regime’s TV and newspapers.  I know everybody inside Iran is aware of the protests, it can’t be missed.

In recent memory there have been protests and fights for democracies and justice in other countries as well.   A revolution is a “perfect storm” not a “storm”.  Some have called the Iranian revolution of 1979 the last of the modern revolutions.  Some at i.com call it something else!  Whatever the case it will be rare to see 2 revolutions in a span of 30 years.  I just don’t want us to lose this opportunity like we lost previous opportunities such as a push for a more expanded constitutional revolution before Khomeini.  Surely there is a lot we can learn from the 1979 revolution and its ideals.

If you listen to slogans inside Iran they are tangible and have immediately recognizable meanings such as the ones used surrounding the aftermath of Montazeri’s death while we were dismissing the old man as gorbeh narreh who helped Khomeini establish this regime.  For us Iranian ex-pats our best art is to predict and forecast based on rudimentary information like saying I see clouds so it will rain.