The impossible is here 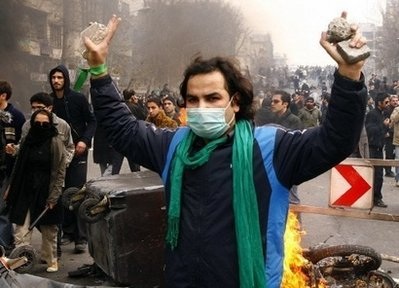 In 1979 Iranians introduced a new form of social revolution. In place of the guerrilla-style armed struggle that had characterized the twentieth-century revolutions in non-western countries, the Iranians modeled a spontaneous nonviolent mass movement. And much to the experts’ surprise, in less than 2 years this movement overthrew a dictatorial monarchy that had the backing of both Western powers and the strongest army in the Middle East. The principles of freedom and independence that sustained this revolution were soon violated by Khomeini, who instituted an even more repressive and brutal regime than that which had been dismantled. But the methods of the early victory set a new precedent, shaping the imagination of what was possible in the Eastern European revolutions of the 1980s.

Now, after thirty years, this revolution has boomeranged back to the streets and rooftops of Iran. A new generation is determined to finish the job that their parents began but could not bring to fruition: the establishment of freedom and democracy in an independent Iran.

The violent confrontations at yesterday’s Ashura demonstrations, which resulted from widespread resistance to the brutality of the regime’s various security forces, have shifted the balance of the struggle towards the people. The question is no longer whether this corrupt regime will be overthrown, but rather when it will go, and how. It is clear that this struggle, which began as a simple protest against the rigged presidential election, can no longer be defined as a movement for either state reform or civil rights. Yesterday’s demonstrations, occurring throughout the country and from Tehran to the smallest towns, cannot be defined by any term other than revolution.

Dictatorships always maintain a fragile balance between fear and anger, which they either inflict on or produce for the people they rule. As long as the fear of the regime’s power outweighs anger at its effects, its position is relatively secure. But if this balance tips with changes in conditions either at home or abroad, and if feelings of anger begin to supersede those of fear, then given opportunity and circumstances it is safe to assume that a regime’s days are numbered. Yesterday, in defiant resistance against thousands of security forces and carrying with them in demonstrations the experiences of more than a century of struggle for democracy, Iranians demonstrated to themselves and to the world that this is truer than ever of the Iranian regime. The balance has tipped from fear to anger, and there is a new determination to make Iran free and independent.

The consequences of this revolution cannot be underestimated. Many argue that it was 1979 Iranian revolution which transformed Islamic fundamentalism into a global phenomenon. If this is correct, then it is possible that the present revolution might to do the ‘unthinkable’ and overthrow a corrupt, fundamentalist regime. Such a non-violent revolution could secularise the state, separating it from religion, and revolutionise religion itself by redefining Islam as a discourse of freedom and a method not for obtaining and managing power, but for expanding freedom. The principles of such an Islam are already being produced, not least of all in the latest works of Grand Ayatollah Montazeri, who during the course of his life became an advocate of human rights. His unprecedented burial gathering, despite being disrupted by the regime’s great attempts to minimise it, suggest that the Iranian public recognises and perhaps even favours this discourse. An authentic Islamic renaissance is already sweeping through many Iranian cities, and its effect on other Islamic countries will be felt in the coming years and months.