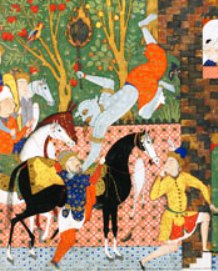 First off, I am not movie critique and this is NOT a movie review. With that out of the way, I’d like to get something off my chest. Actually, a couple of things. I promise I won’t be long.

Yesterday I went to the Sackler Gallery at the Smithsonian. http://www.asia.si.edu/exhibitions/current/falnama.htm

The exhibition “Falnama: The Book of Omens” has been on display since October 24th and this Sunday was the last day. I have to admit, however, that Falnama was not the reason I went there. Although the name and basically 90% of the exhibition there is Persian, it is “Islamic Art” that is the theme of the exhibition. It is what’s being promoted. There were no mention of Persian scholars and scientists’ contribution to what made Arabs claim what they took from Persia as theirs.

I don’t know about you, but these days when there are organized displays of Islamic glory, it makes me suspicious! Here’s the disclaimer you see when you visit the website above:

Wow, generous support form anonymous donors. Gee, who might that be?  Let’s see, everything about this yells …I R A N… out loud, yet it does not! Who is it that we know cares more about Islam than Iran? OK, you’re not convinced, I know, I am not the most unbiased guy out there, but wait, that’s not all. The “movie” I talked about earlier is the main centerpiece of all this. It is called “Tazieh” by Abbas Kiarostami. Now Mr. Kiarostami is a renowned filmmaker and I am by no means slamming his work here. The movie is basically a documentary about the Tazieh ceremonies that take place during Muharam, the holly Shia month where Hussein, Prophet Mohammad’s grand son was martyred along with 72 of his followers in Karbala, Iraq by Yazid. But, the interesting thing is that the setup for the showing of this documentary. There are 2 huge (8’) screens showing, in black & white, the faces of men, women and children in the audience while a flat 42” screen showed the actual play and ceremony that is Tazieh. Obviously, Kiarostami’s intention is not to highlight the ceremony, but to show who goes to these ceremonies and perhaps, one of the reasons why our country has been a clerical theocracy for the past 30 years. The showing of this film here and now and the fact that there were a number of Americans and westerners seeing it points to intentions well beyond a simple showing of a religious ceremony, but a calculated display of the people’s dedication to Islam and those who seem to uphold in an otherwise Persian nation. I would not have been surprised if the exhibition and the film were by an Arab country, but as usual, it is the Islamic regime that is trying to spread the word. It did not say where this Tazieh was taking place, but referred to it as a “rural” area. We stayed through about 20 minutes of this documentary and left.

I understand the need for cultural institutions to ensure that they are unbiased, to show that they see all things equal and that they present knowledge and history as it formed us and as we formed them throughout ages. But this appears to be a deliberate attempt to prop up Islam by none other than the Islamic regime. We left the theater disappointed and down. We thought about all the great things that could be communicated and shared with the people of the world about Iran, her rich culture independent of Islam and its influences, but alas, that would not be, at least not now.

This is not an attack on anyone or any ideology – Just my thoughts. If you like to comment, keep that in mind.

There was, however, one silver lining to the Sackler visit. I’ll blog about it shortly.