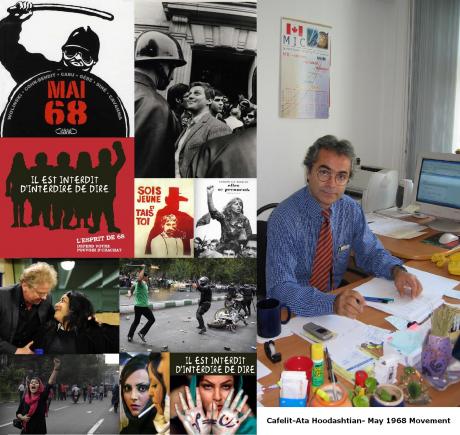 Dr. Ata Hoodashtian Speaks about the historical and social Impact of the French May 68 Movement. He is professor in Philosophy and Political Science, and director of the “Management Institute of Canada”, based in Montreal, Canada.

NOTE: This interesting conference is incomplete. If Anyone can find the Complete Video it would be appreciated.

Ph.D. in Political Science from the University of Paris, MA and DEA in Philosophy from the Sorbonne University, France.

Associate professor in Philosophy and Political Science, and director of the “Management Institute of Canada”, based in Montreal, Canada.

He has taught in France for a period of 10 years at Institutes, Grandes Ecoles and the University of Paris 8, and worked in Asia (Central Asia and China) for 3 years, as Assistant Professor and Director of the Research Center. He has collaborated with Yale University, European Universities, NGOs, and has been Chair of the Editorial Board of the “Central Asian Journal” for two years, published in collaboration with Yale University, and is a member of the CRISE, research center at the University of Paris 8 since 1997.

He has published books and articles in Paris, Montreal, and Tehran, in English, French and Persian, and has completed two books on ‘Modernity and the Orient’, and ‘Central Asia’, to be published in French in 2006.