Who Was Haji Mirza Aqasi? How Did He Change The Course of History? 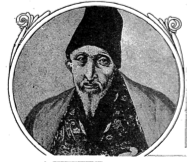 Who Was Haji Mirza Aqasi? How Did He Change The Course of History?

Haji Mirza Aqasi, was instrumental in preventing the meeting of The Bab and Muhammad Shah Qajar, after the Shah facilitated a Royal Escort to lead the Bab to the capital. Tehran.

His actions and what followed, undoubtedly changed the course of Iran’s history, leading to the continued rule of a backward and corrupt cleric influence; one which still affects Iranian society.

Aqasi, Haji Mirza (‘Abbas Iravani) (c. 1783–1849)Prime minister of Iran under Muhammad Shah Qajar from 1835 to 1848; regarded by Bahá’ís as the Antichrist of the Bábí dispensation.

Haji Mirza Aqasi, whose given name was ‘Abbas Iravani, was born and raised in Mákú, Azerbaijan, in northwestern Iran. His father was a mullá and small landowner from Yerevan, Armenia. During his youth Mírzá ‘Abbás Íravání studied with Mullá ‘Abdu’s-Samad, a guide and elder of the Ni‘matu’lláhí Sufi order, in the holy city of Karbala in Iraq. Mírzá ‘Abbás Íravání then spent a period of time living as a dervish, wandering from place to place, before taking up residence in Yerevan. Later he went to Tabriz, where he was employed by Mírzá Buzurg Qá’im-Maqám as a tutor to one of his sons, Músá, and gained both rank and wealth. Mírzá Buzurg gave him the title Aqasi (Chief Officer of the Household) by which he was subsequently known.

After his patron’s death in 1821, factionalism stemming from the rivalry between Mírzá Buzurg’s sons caused Aqasi to fall into disfavor for a time, but by 1824 he was back in Tabriz, tutoring several of the sons of the crown prince, ‘Abbás Mírzá. In his position as tutor, Aqasi succeeded in becoming the confidant and spiritual guide of Muhammad Mírzá (b. 1808), the crown prince’s eldest son, who acceded to the throne as Muhammad Shah in 1834.

In 1835 Muhammad Shah had his first prime minister, Abu’l-Qásim Qá’im-Maqám, murdered and replaced him with Haji Mirza Aqasi. During his first year in office, Aqasi succeeded in removing from power most of the supporters of the previous prime minister, filling their positions with his own nominees from Mákú. Among those whom Aqasi removed from power was Bahá’u’lláh’s father, Mírzá Buzurg Núrí. Bahá’u’lláh Himself had a prolonged legal dispute with Aqasi over a village, Qúch-Hisár, that Aqasi coveted.

During his term as prime minister, Haji Mirza Aqasi sought unsuccessfully to reform the army. The campaign of 1837–38 in which Muhammad Shah and his forces besieged the city of Herat in western Afghanistan resulted in the shah’s being forced to retreat and to conclude an unfavorable treaty with Britain in 1841. Aqasi’s inexperience in administration and finance, combined with entrenched governmental corruption and incompetence and a soaring budget deficit, contributed to the near bankruptcy of the country, rendering it ripe for revolution. He became extremely unpopular, which led to a number of attempts on his life. One of his most unpopular acts was to repossess villages from tuyúl holders (whose fiefdoms were granted during the reign of Fath ‘Ali Shah, 1797–1834), resulting in the transfer of a great deal of land to the crown.

On the death of the chronically ill Muhammad Shah in September 1848, many of Tehran’s elite rose against Aqasi. He fled to the shrine of Shah ‘Abdu’l-‘Azím near Tehran. Stripped of his wealth, he sought refuge in Karbala, where he died on 1 August 1849.

RELATIONS WITH THE BÁB AND BÁBÍS

Since Aqasi’s position as prime minister was a consequence of his spiritual mastery over Muhammad Shah, it is not surprising that Aqasi viewed with alarm any rival for the shah’s favor. He seems to have remained unconcerned about the rise of the Bábí movement between 1844 and 1846, but the Báb’s growing renown finally triggered Aqasi’s fear that the shah, who was curious about the claims of the youthful and charismatic religious leader, might be influenced by Him. These fears could only have been intensified when Aqasi learned that the Báb had won over the redoubtable governor of Isfahan, Manúchihr Khán, in 1846.

Seeking to discredit the Báb in the shah’s eyes, Haji Mirza Aqasi incited the mullás of Isfahan to condemn the Báb. The shah subsequently summoned the Báb to Tehran. Manúchihr Khán, however, concerned for the Báb’s safety, managed to keep Him in Isfahan for four months. Then, early in 1847, Manúchihr Khán died suddenly. He had expressed a desire to convert the shah, but he died unexpectedly before he could act on his intention.

When it became apparent that Manúchihr Khán had been keeping the Báb safe in Isfahan, the shah again summoned the Báb to Tehran. While the Báb was en route, Haji Mirza Aqasi instructed Him to break his journey by stopping in the village of Kulayn, less than fifty kilometers (thirty-one miles) from Tehran. Aqasi, who owned the village, had a tent pitched for the Báb in pleasant surroundings. After weeks had passed, the Báb wrote a letter to the shah, requesting a meeting with the sovereign. Determined that the meeting not take place, Haji Mirza Aqasi instilled fear in the shah, saying that the Báb planned trouble and mischief, and also stressed that a meeting would be untimely because the shah was about to leave the capital. He managed to persuade Muhammad Shah that the best plan of action would be to send the Báb to the fortress of Mákú. The shah sent a letter to the Báb, dated March/April 1847, asking Him to proceed to Mákú. Shoghi Effendi has said that this letter, “though couched in courteous terms, clearly indicated the extent of the baneful influence exercised by the Grand Vizir [Prime Minister] on his sovereign.”1 The Báb was being sent to Mákú as a prisoner; He would remain a prisoner for the rest of His life.

In the course of the Báb’s journey to Mákú, Haji Mirza Aqasi stopped letters between the Báb and the shah from being delivered. With the Báb imprisoned in Mákú, Haji Mirza Aqasi thought his actions—sending the Báb to Mákú (whose residents were strongly in Aqasi’s debt) and preventing the Báb from meeting the shah—had suppressed the Bábí movement. During the Báb’s confinement in Mákú, however, Haji Mirza Aqasi discovered through his spies that the Báb’s popularity in Azerbaijan was growing. In addition, partly because the warden of the fortress, ‘Alí Khán, had relaxed the rules of access to the charismatic prisoner, Bábís were able to go to Mákú and meet the Báb, ensuring that His influence continued to spread throughout the country. Haji Mirza Aqasi realized that his efforts had not succeeded, and his hostility toward the Báb and the Bábís increased.

Therefore, in April 1848, Haji Mirza Aqasi decided to send the Báb to a more remote location. In Chihríq, another fortress in Azerbaijan, the pattern repeated itself. When the jailors began relaxing the terms of the Báb’s confinement, Haji Mirza Aqasi again intervened, and, after three months in Chihríq, the Báb was summoned to Tabriz. There the prime minister issued an order for the Báb to be tried as an apostate before a gathering of high-ranking religious leaders (mujtahid) in the presence of the young crown prince, Násiri’d-Dín Mírzá.

Aqasi hoped for a public humiliation of the Báb that would extinguish the Bábí movement. Instead, the result of the trial was inconclusive. The Báb shocked the gathering by claiming publicly to be the promised Mahdi. The mujtahids attempted to ridicule and discredit Him but, unable to shake His claim, finally managed to sentence Him, not to death, the usual punishment for apostasy, but to corporal punishment by means of the bastinado. After He recovered from his injuries, which were complicated by a blow that struck His face, He was sent back to Chihríq on Haji Mirza Aqasi’s orders.

By the end of 1848, Muhammad Shah was dead and Aqasi in exile. However, governmental opposition to the Báb continued and intensified. Encouraged by the ulama (Muslim religious leaders), the public increasingly turned against the Báb and His followers, and the Bábís “were held responsible for the country’s general state of turmoil.”2

HAJI MIRZA AQASI IN THE BÁBÍ AND BAHÁ’Í WRITINGS

In His book the , written early in His ministry, the Báb addresses Haji Mirza Aqasi:

O Minister of the Sháh! Fear thou God, besides Whom there is none other God but Him, the Sovereign Truth, the Just, and lay aside thy dominion, for We, by the leave of God, the All-Wise, inherit the earth and all who are upon it, and He shall rightfully be a witness unto thee and unto the Sháh. Were ye to obey the Remembrance of God with absolute sincerity, We guarantee, by the leave of God, that on the Day of Resurrection, a vast dominion shall be yours in His eternal Paradise.3

The Báb’s later position regarding Haji Mirza Aqasi is unequivocal. In a letter to Muhammad Shah, the Báb calls Aqasi “the devil whom thou hast appointed as thy Chancellor”4 and warns the shah that Haji Mirza Aqasi “will bring thee into grievous trouble by reason of that which Satan instilleth in his heart, and verily, he himself is Satan.” The Báb finds Aqasi’s actions unprincipled and self-serving: “He comprehendeth not a single letter from the Book of God and is seized with fear by reason of that which his hands have wrought. Fain would he extinguish the light which thy Lord hath kindled, so that the old impiety which is concealed in his inner being may not be revealed.” The Báb adds that, if Muhammad Shah had not appointed Haji Mirza Aqasi as prime minister, “no one would have paid him the slightest attention. Indeed in the estimation of the people he is naught but manifest darkness.”5

Haji Mirza Aqasi was the recipient of at least one epistle, known as the Khutbiy-i-Qahríyyih (Sermon of Wrath), from the Báb. Shoghi Effendi describes it as “couched in bold and moving language” and “unsparing in its condemnation.”6 The Bábí historian Nabíl states that in this document, which has not yet been published, the Báb “addresses the Grand Vazír of Muhammad Shah in these terms: ‘O thou who has disbelieved in God and hast turned thy face away from His signs!'”7

In his survey of the first century of Bábí and Bahá’í history, God Passes By, Shoghi Effendi refers to Haji Mirza Aqasi as “a vulgar, false-hearted and fickle-minded schemer” and calls him “the Antichrist of the Bábí Revelation.”8

Author: Sholeh A. Quinn © 2009 National Spiritual Assembly of the Bahá’ís of the United States. Terms of Use. Notes:


Other Sources and Related Reading: