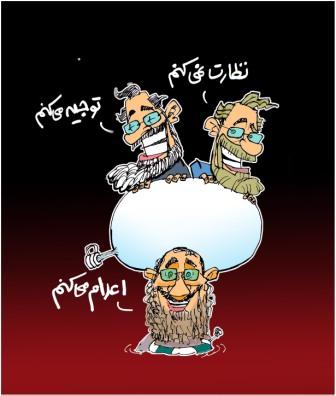 They’ve got a nice little family business going, haven’t they? Their business is death and destruction, deceit, and duplicity. The three brothers now sit on the top seats of the most prominent organizations representing the Islamic Republic of Iran, heading its Judiciary, its Parliament, and its outside face in charge of covering up IRI’s darkest times of oppression, suppression, and murder. Who are these lying morons? How did they get to their positions and how have they managed to keep so much crime all in the family?

Ali Larijani has served in high government positions all through the 31 year life of the Islamic Republic of Iran. A former member of Sepaah (IRGC), he has served as head of state broadcasting organization (IRIB) where he worked hand and glove with Saeed Emami to produce televised confessions and programs to tarnish the names and achievements of Iranian intellectuals; as Minister of Islamic Culture and Guidance; as Secretary of Supreme National Security Council, and such IRI’s chief envoy on the nuclear issue; Speaker of the Islamic Parliament; and has run for presidency in the past. He is the man under whose direction, the Iranian Parliament made a lukewarm attempt at fact finding about the crimes committed at Kahrizak Detention Center. Did the “Special” fact finding commission find any facts? Not really, except to report that Saeed Mortazavi was the one who had ordered the dispatch of detainees to Kahrizak but that allegations of rape and murder, as were reported by a Karroubi/Mousavi fact finding committee were unfounded. He also has the perpetual shame of inadvertently having left the mic open during a vote casting session just after he had shrugged off the Kahrizak fiasco, heard by all as he and his other colleagues were joking around about “becoming Kahrizaki” if there were objections to the voting results, meaning the objectors could be raped and murdered.

His brother Mohammad Javad Larijani, who has safeguarded his academic position at Tehran University, heading a research center, all through these years, has also served as a Member of the Islamic Parliament and more recently as Vice Minister of Foreign Affairs within the Judiciary. He is currently head of the Human Rights Council in the Judiciary and a top adviser to the Supreme Leader. His foot in mouth remarks have amused and saddened Iranians for years. When you listen to this man talk, it is very hard to find a reason to respect him. A hard-core fundamentalist and an extremely rude man, one of his recent remarks in which he called Barack Obama a Kaka Siah is, unfortunately, still fresh in our minds. He has made many other insensitive, inaccurate, and plain stupid remarks in the past, too. But his most recent comments at the United Nations Human Rights Council in which he lied through his teeth about IRI’s recent violations of human rights are probably the icing on the stale cake that makes up this particular stooge.

The third brother is probably the most ridiculous choice for filling one of the most important positions in Iran. His one and only “claim to fame” has been his membership in the Guardian Council, where he must have been a very good boy, following orders and directions of his more senior colleagues and the Supreme Leader himself in order to be noticed. The out of nowhere appointment of Sadegh Larijani as Head of Judiciary simply goes to show how desperate Khamenei and his gang were to appoint someone to the position who would have absolutely no education, smarts, or guts to muster even a modicum of independence and integrity. The hapless chap has become the signature machine of the thugs who are now ruling Iran, issuing death sentences and threats to unarmed dissidents who continue a nation’s centuries old quest for justice.

The three brothers in Iran’s most sensitive positions at a monumentally important time in Iranian contemporary history, do not encourage any kind of trust or optimism in anyone that IRI might be coming to its senses anytime soon or that there is any hope of avoiding a confrontation between IRI and Iranian people and IRI and the rest of the world. Whoever these three musketeers are and however they got into their positions, it is increasingly clear that they are determined to destroy Iran. Let’s hope the Iranian people gain momentum on them and avoid this travesty before it is too late.