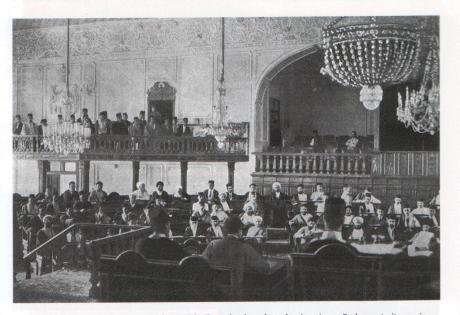 The first Public gathering of Iranian Deputies in the Persian Majlis ( Parliament) in Tehran shorty after the Constitutional Revolution of 1906. (circa 1906)

Bebin TV summary of the Constitutional Movement in Iran:

Reza Pahlavi’s message on the Anniversary of the 1906 Constitutional Revolution in Iran:

Mashaollah Ajoodany on the Constitutional Revolution and it’s implications in today’s struggle for Democracy and Human Rights:

And in relation to the Green Movement today:

Parliamentary systems are characterized by no clear-cut separation of powers between the executive and legislative branches, leading to a different set of checks and balances compared to those found in presidential systems. Parliamentary systems usually have a clear differentiation between the head of government and the head of state, with the head of government being the prime minister or premier, and the head of state often being a figurehead, often either a president (elected either popularly or by the parliament) or a hereditary monarch (often in a constitutional monarchy).