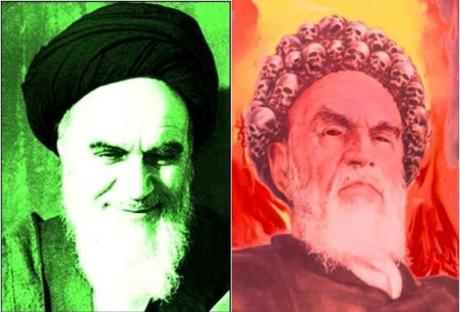 Like Mao and Lenin in the 20th century, Khomeini played a dogma-building role for his native country; and is similarly, either loved or hated by its populace. Lenin and Mao established the grandest dictatorships of the “proletariat”, which really meant the tyranny of communists. Similarly, Khomeini’s thesis was summed up in his Velayate Faghih (autocracy of the mullahs). Both systems assert that there exists an absolute and idealized truth (philosophy), whose masters (communists or mullahs) must have absolute power over the society.

Khomeini’s core idea can be traced back to Aristotle and Plato’s utopia of the ideal realm, where a philosopher would lead and the people would be ruled on an ideological basis. Such a closed-society has been the ultimate goal of every domineering ideology, from Moses to Mao.

On the opposite corner, for three thousand years, has stood the individualistic and elective open-society of the Greco-Roman variety. Theirs was ruled by multiple elected bodies and leaders, who were so mistrusted with power, whose terms seldom exceeded a year or two.

History has time and again proven that most closed-societies have been incapable of walking past the primary levels of barbarism. The promised land of Soviet Union turned into a giant concentration camp, and Mao’s cultural-revolution took China to the heart of famine and desperation. Only through the bold rejection of those ideological yokes, have Russia and China been able to start walking past a state of mental-slavery.

Nevertheless, a curious tourist can still visit the shrines of Lenin and Mao in their modern “emam-zadeh”. Still, the official word in Moscow and Beijing is that those two ruthless monsters were among the “saints”. Why not? Their philosopher-kings are dead, and those people can safely say, “Long live the king”! When the time comes, the Iranian Greens may shout that too.