The Prerequisites of Escalation 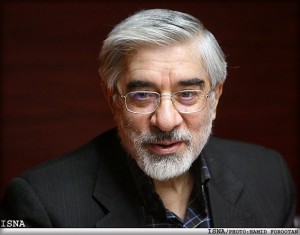 In his 17th statement, Mir-Hossein Mousavi made five specific points that he deemed necessary to start the political (and national) reconciliation process. The proposal lead to a noticeable uptick in talk about the need for national “unity”in the weeks leading up to 22 Bahman, and also garnered much attention from Iranian intellectuals and dissidents alike. Ultimately, the regime’s more radical elements reemerged and silenced the chatter before the security apparatus prevented a strong opposition showing on the revolution’s 31st anniversary. But Mousavi’s “five points,” as they have come to be called, still carry much weight. Generally, they are:

Were these five conditions to be met, the Green movement would arguably have the breathing room it needs to mobilize and begin the long process of transforming Iranian society. For if anything became apparent in the weeks leading up to and after the June election, it is that Iran has undergone an awakening. The repression that the above five grievances capture has simply prevented the social movement’s aspirations from coming to fruition.

Therefore, perhaps an alternative frame can be adopted to view Mousavi’s five points. As a recent Tehran Bureau profile wonderfully captures, the reluctant leader of Iran’s opposition has matured into a rather shrewd, cautious, and patient figure since the late 1970s. Behind the caution, however, Mousavi likely recognizes that the regime has reached a point of no return, and is only prevented from fully voicing such a sentiment publicly by current circumstances. The tyranny, the executions, the outright fascism — all of it is, to quote Mousavi himself from an interview on the eve of 22 Bahman, an outgrowth of the “revolution’s failures” and the “roots of tyranny and dictatorship” that persist from the reign of the Shah. These are damning (and yet still very measured) words from one of the Islamic Republic’s own founding fathers.

Thus, seeing the regime in this light gives Mousavi’s five points new significance. The demands may not only be five steps that the regime must take in order to rescue the country from its current crisis, but moreover, five blatant and particularly egregious shortcomings that the regime will likely be unwilling to address, thus inevitably escalating the conflict between the Greens and the regime. For in the wake of the June coup d’etat, if one thing has become clear it is that those currently in control will never meet any such conditions, even if moderate voices within their camp plead otherwise. Political calculus has been replaced by megalomania, with the possibility of reconciliation falling victim.

And so if these five points are instead five tests that the regime must fail before the confrontation escalates, the news emerging this week from the Expediency Council and Assembly of Experts — both bodies chaired by Akbar Hashemi Rafsanjani — is indeed very telling. First, the Council began considering a proposal being pushed by Rafsanjani and Mohsen Rezaei that would take away the Guardian Council’s vetting role away from it and instead give it instead to a new “National Election Committee” of sorts, which would conveniently be under Rafsanjani’s supervision in the Expediency Council. (Ironically, the proposal to revise the country’s election laws was made to Supreme Leader , after which he ordered for new election plans to be drawn up.)

Make no mistake: this would essentially be a first step in meeting the second condition laid out in Mousavi’s 17th statement. Were the changes to the vetting process be enacted, the Guardian Council would no longer be able to disqualify candidates from running for president or parliament, as it did when it disqualified all but four candidates from running in the 2009 presidential election.

The chances of the plan being enacted appear slim. With the regime still reeling from the aftermath of the June elections and still off-balance while facing a resilient opposition going forward, it would have no reason to suddenly invite more political opposition in Majlis through freer elections in 2012. Hossein Shariatmadari, editor of the ultra-conservative Kayhan daily and someone who is regarded as being close to Khamenei has already come out on the attack, stating that any proposal to create such an electoral commission would be “against the Islamic Republic’s constitution.”

No sooner than the proposal was being discussed, more divisive conservative rhetoric emerged from the other body Rafsanjani chairs, the Assembly of Experts. In a statement reported by Fars News, the Assembly allegedly declared that the regime’s patience with the opposition “ended in December after sedition leaders missed numerous chances to repent and return into the gown of the revolution.” Khamenei, for his part, has the statement’s pronouncement in his own declaration, stating that those who still do not accept the result of the June presidential election “would be disqualified from participating in the Islamic system.”

The obstacles lying in the way of revising the regime’s election laws aside, the other four points from Mousavi’s 17th statement have gone unheeded as well. Saeed Mortazavi, though implicated by Majlis in the Kahrizak torture-murders, remains a free man. Rather than having political prisoners freed, the country recently saw the greatest wave of arrests sweep dissidents and reformists since late June and early July. Meanwhile, state-controlled media remains entirely propagandized while any questions regarding citizens’ right to freely assemble were surely answered by the enormous security presence deployed on 22 Bahman.

Not even appearing to consider the grievances, the regime seems bent on acting counter to each of Mousavi’s five points. Despite the intentions of some delsoozan (or “heartbroken” moderate conservatives), any previous promise of political reconciliation appears dead or moribund at present. Instead, the crisis seems destined to continue indefinitely, and with both sides refusing to back down, Mousavi’s five grievances may come to be prerequisites that the regime must unequivocally reject before the opposition can decide on what will be the uprising’s next phase.