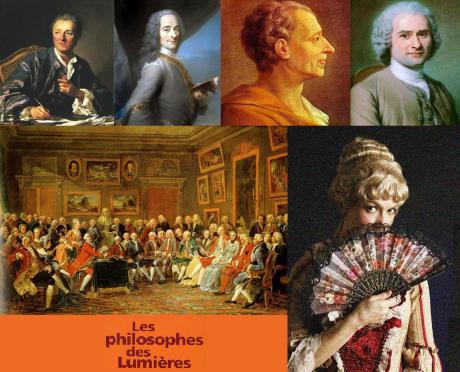 The Age of Enlightenment (or simply the Enlightenment) is a term used to describe a time in Western philosophy and cultural life, centered upon the eighteenth century, in which reason was advocated as the primary source and legitimacy for authority.

Part of a 16 hour documentary available at the Open University Website :

Women of the Enlightenment:

The term “Enlightenment” came into use in English during the mid-nineteenth century,with particular reference to French philosophy, as the equivalent of a term then in use by German writers, Zeitalter der Aufklärung, signifying generally the philosophical outlook of the eighteenth century. However, the German term Aufklärung was not merely applied retrospectively; it was already the common term by 1784, when Immanuel Kant published the influential essay “Answering the Question: What is Enlightenment?”

Developing simultaneously in Germany, Great Britain, France, the Netherlands, Italy, Spain, and Portugal, the movement was buoyed by Atlantic Revolutions, especially the success of the American Revolution in breaking free of the British Empire. Most of Europe was caught up, including the Polish-Lithuanian Commonwealth, Russia and Scandinavia, along with Latin America and instigating the Haitian Revolution. The signatories of the American Declaration of Independence, the United States Bill of Rights, the French Declaration of the Rights of Man and of the Citizen, and the Polish-Lithuanian Constitution of May 3, 1791, were motivated by Enlightenment principles.

The terminology “Enlightenment” or “Age of Enlightenment” does not represent a single movement or school of thought, for these philosophies were often mutually contradictory or divergent. The Enlightenment was less a set of ideas than it was a set of values. At its core was a critical questioning of traditional institutions, customs, and morals. Thus, there was still a considerable degree of similarity between competing philosophies. Also, some philosophical schools of the period could not be considered part of the Enlightenment at all. Some classifications of this period also include the late seventeenth century, which is typically known as the Age of Reason or Age of Rationalism.

There is little consensus on when to date the start of the age of Enlightenment and some scholars simply use the beginning of the eighteenth century or the middle of the seventeenth century as a default date.If taken back to the mid-1600s, the Enlightenment would trace its origins to Descartes‘ Discourse on the Method, published in 1637. Others define the Enlightenment as beginning in Britain’s Glorious Revolution of 1688 or with the publication of Isaac Newton‘s Principia Mathematica which first appeared in 1687. As to its end, some scholars use the French Revolution of 1789 or the beginning of the Napoleonic Wars (1804–15) as a convenient point in time with which to date the end of the Enlightenment.