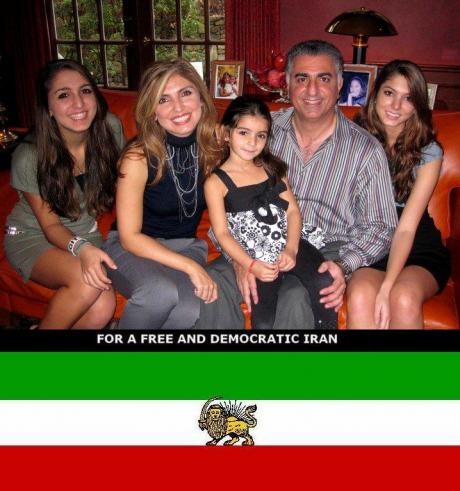 An Interview with the Shah’s Son by Christoph Lehermayr about the Mullah Regime, its atom bomb, his succession to the throne and his image of Austria. (Austrian Equivalent of French Point de Vue Magazine )

Interview about the Mullah Regime, its atom bomb, his succession to the throne and his image of Austria.

THE HEIR TO THE PEACOCK THRONE.

He was a small boy when his father was in power and his family appeared week after week in the popular press. Today Reza Pahlavi is one of the most influential critics of the Regime in Iran. Now he speaks in NEWS.

Does the prince want to be back on the throne?

The regime in Teheran achieved what it wanted. Iran has almost completely disappeared from the headlines: no more mass demonstrations in the streets that could call the Ayatollah’s authority into question, just some trials put on display in which those against the regime would be condemned for their actions. And new reports making one of the West’s worst nightmares more possible: an atom bomb in the hands of the Mullahs. This should be the case after Christmas.

Reza Pahlavi follows what is going on in his home country very closely. He would be sitting on the Peacock throne today and would be the Shah of Persia had history wanted it differently. In one of his rare interviews, the monarch explained exclusively in NEWS why the “revolution” still continues, why time is against the Mullahs and how he sees his own role in the Iran of the future.

NEWS: You were 18 years old when your father, the Shah, who was suffering from cancer, fled from Iran in 1979. What memories do you have from that time?

Reza Pahlavi: Those were very trying and difficult months for my family and me, up to my father’s death a year later in Egypt. But our thoughts were much more directed towards our homeland that was already enduring the first consequences of Khomeini’s revolutionary regime.

NEWS: Yes, but even your father’s reign turned out fragmented. He is credited with having modernized Iran both economically and socially. Critics, however, insist that he had, in the course of his continuous reign, completely lost contact with the people.
Pahlavi: I will leave it to history and historians to judge my father’s reign. But most of all it is up to all those Iranians who have the benefit of perspective and in the same way are in a position to compare things.

NEWS: Thirty years have gone by and the Mullahs had stabilized their power up until June when mass protests broke out after Ahmadinejad’s reelection. How surprising were these events to you?

Pahlavi: Not especially surprising. The scale of the protests was new, but not the frustration and discontent that inspired them, for they have been there for a long time. The regime is known for its electoral fraud, its prohibition of free expression, and how it intimidates, tortures and murders its opponents. Many may have not foreseen the voting fraud, but everyone that is familiar with Iran knew that it was only a matter of time before widespread, pent-up frustrations would be released.

NEWS: But what was the result of the protest? In the end the demonstrations were brutally beaten down, the opposition arrested and tortured on a massive scale…

Reza Pahlavi: It is important for the international community to understand that it would be unrealistic to expect a prolonged and sustained campaign of street demonstrations and public unrest. That was the first and most important phase of a long path. In this way the people of Iran recognized their own power. It also made the world aware of what was really happening in the country and it shook the regime’s confidence in itself.

NEWS: But what will happen next? How will this continue?
Pahlavi: There will continue to be resistance, strikes, civil disobedience, and attempts to paralyze the regime. The success of these actions depends on the degree of national as well as international support.

NEWS: How can foreign countries strengthen the opposition?
Pahlavi: I like to speak of “smart sanctions.” With that I mean economic and diplomatic steps, which inflict damage on the regime where it really hurts.

NEWS: Has that been happening all along then? It seems that statements from US-president Obama, but also those of quite a lot of EU leaders have been quite vague…
Pahlavi: Even before the election president Obama spoke of wanting to lead an unconditional dialogue with the regime. But then came the election and millions of Iranians went to the streets and dared to publicly denounce this regime as illegitimate. Politicians must react to this internationally.

NEWS: But how? Do you demand that talks with the Iranian leadership be completely broken off?

Reza Pahlavi: No, but there is no reason why dialogue should not be established with the democratic opposition to this regime as well. For three decades the regime has been effective in squashing its citizenry and monopolizing all communications with the outside world. That must end. Let us remember that the iron curtain could also not have fallen without the tacit support of the free world. Iranians too deserve this same kind of help.

NEWS: But all the millions who demonstrated at the beginning, didn’t they just want to support their candidate Mir Moussawi? He’s a part of the Islamic Republic.

Reza Pahlavi: That is correct. But we are speaking about Iran, a closed political system, and not about a country like Austria where freedom of expression is prevalent. Iranians strive just as much after freedom and democracy, but to make these demands publically in Iran would put one’s life in danger. For this reason people look for more indirect ways to express themselves. The voting fraud protest was just such a way to show the leaders as well as the world what is really happening in the country.

NEWS: Are you convinced, then, that the masses wish for the collapse of the present regime in Iran as an ultimatum?

Reza Pahlavi: Yes, indeed that’s my opinion. Make no mistake; the people of Iran will not risk their lives for a candidate, but rather for the dream of human rights, freedom, democracy and ultimately a better life. Like all great enduring movements, this is about ideas, and for this reason the most profound slogan being chanted is: “We don’t want our votes back! We want our country back!”

Iran – a country between the modern age, monarchy and Mullahs.

* THOUSAND YEAR-OLD CULTURE. The Persian kingdom of antiquity reached from parts of present day Greece across Libya all the way to Asia. But after the time of the Islamic expansion it was first the Pahlavi dynasty (coat of arms, right) at the beginning of the 20th century that turned its attention to the West. In 1941, Reza Pahlavi’s father was crowned as Shah (Farsi for King) on the peacock throne. To a large extent the monarch ignored the Shiite religion and the Islamic resistance grew. Finally in 1979 he had to leave the country. Ayatollah Khomeini followed, the Islamic Republic came into being.

* ECONOMY. Iran has the third largest oil reserves in the world. It has, however, so few refineries at its disposal that it must yearly import 4 billion dollars worth of gasoline. Unemployment and inflation are high in this country of 74 million, and in spite of attempts of modernization, poverty is widely prevalent.

* VISION. Why the Mullahs are losing power.

NEWS: Here I am speaking with you, the son of the last king of Persia, the Shah. If there were still a monarchy, you would be sitting on the throne today. Do you want to go back there?

Reza Pahlavi: My mission today is to help my compatriots free themselves from this regime so they may go to the polls freely and be able to decide their own future. From that day forward, I will stand ready to serve them and my country if I am called upon.

News: But do the majority of Iranians really want a return of the monarchy?

Reza Pahlavi: That is difficult to say. In the absence of free and open public debate, it is virtually impossible to measure public opinion. But that is exactly what we must achieve. What we now have in Iran is a religious dictator. Instead, I propose a secular parliamentary democracy, in which there would be a clear separation between the state and religion. Whether that would ultimately be a parliamentary monarchy or a republic will need to be decided at the end of this path by means of a national referendum.

News: And until that time the world must deal with the fact that according to British secret service intelligence, the Mullah regime will have enriched enough uranium by the end of the year in order to build an atomic bomb. Do you think that is realistic?

Reza Pahlavi: Years of the regime’s opacity, lies and deceit have taken its toll on the world’s patience, contributing to a growing loss of confidence and trust. The regime has cleverly tried to play the nationalistic card, arguing for the nation’s sovereign rights to nuclear energy. Indeed, no one in the world has challenged Iran’s sovereign right to nuclear energy; rather it has demanded more transparency in order to demonstrate its lack of ambition beyond the peaceful use of nuclear technology. This transparency is what the regime is lacking.

News: How long do you think that the clerics will be able to maintain power?

Reza Pahlavi: It is difficult to predict a specific timeline. However, it is clear that the regime’s repression and fundamentalist archaic vision is in direct conflict with the aspirations of Iranians. We will not put up with it much longer. Time is on our side and not the regime’s.

News: Let’s talk about your private life too. How is your mother, Farah Diba, doing? A lot of people here in Austria today still admire her.

Reza Pahlavi: She often fondly told me about her travels to Austria, and I know that she is still today in contact with many people there. My mother is already 70 years old. She is still an exemplary supportive mother, and an affectionate grandmother who also occupies herself by continuing her support of charities that are at work in Iran.

News: At one time your parents were often in Austria. What is your relationship with our country?

Reza Pahlavi: The first time I was in Austria was in 1975 with my siblings and my grandmother. Salzburg is still vivid in my memory. I was back in Austria just two years ago at a conference in Tyrol. I hope to be able to visit Austria, especially with wife and three daughters, whose exposure to your country has only come through “The Sound of Music,” a film they have seen dozens of times! By taking piano lessons, my daughters are familiar with Austria’s rich heritage, with which they hope to personally acquaint themselves.