Resolution to the vacuum of leadership: We need a Woman to lead this Revolution 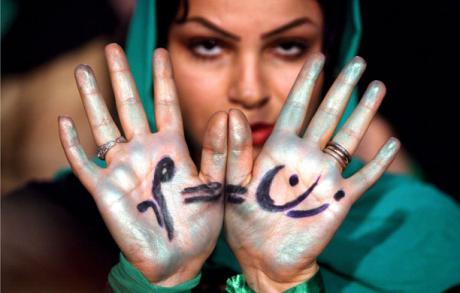 Folks, it occurs to me that perhaps the whole spectrum of the opposition is going about dislodging this ahrimanic (un)Islamic regime the wrong way. Revolutions are usually symbolic affairs played out dramatically in the real world. Symbols and the power they exercise on the collective imagination is what often determines the difference between success or failure in such ventures. So allow me to throw the following idea out there and let’s see what comes of it.

I believe the best unifying figure for a successful opposition thrust to overthrow the (un)Islamic republic and for people to rally around can only come from a woman. Since the women of Iran are coming into their own, are now far more educated than many of the men, and in terms of population are also fast outpacing the men, my belief is that we need a unifying female opposition leader to lead the overthrow of the mullocracy. Couple that with the fact that the liberation of Iran is both symbolically and literally about the liberation of the women of Iran and end to patriarchy, and I believe this issue is almost centrifugally connected to the succesful end of this regime. We do not need the Mousavis, Karroubis, Reza Pahlavis and similar. We need someone who embodies the social democratic pragmatism of a Shapour Bakhtiar together with the radicalism and charisma of a Qurra’tul-‘Ayn. Amongst the current list of known candidates there isn’t anyone who fulfills that role that I am aware of. Shirin Ebadi is not aggressive enough. Maryam Rajavi is a leader of a discredited cult. Farah Pahlavi would probably not be interested. But there are countless other Iranian women out there who, if they only stepped up, would more than qualify for this role. Even the idea of a matriarchal monarchy, i.e. a Queen of Iran and not a King, is at this point an option to explore.

Women of Iran Unite! We will follow! And will our Imamah/Malakah please stand up!