PARLIAMENTARY DEMOCRACY: Should Australia Or Canada Become a Republic ? 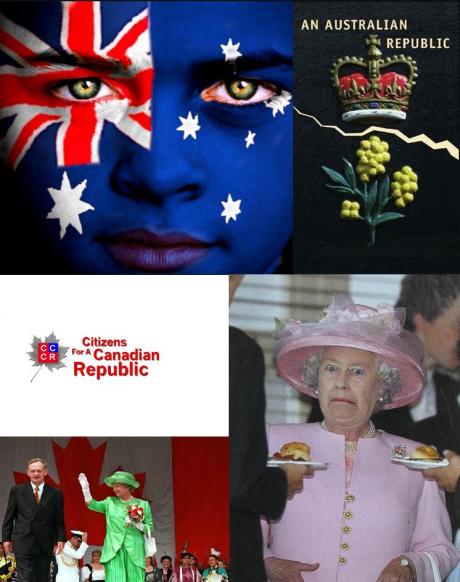 Both Australia and Canada are Constitutional Monarchies and full members of the British Commonwealth. Yet in recent years debate over whether or not they should Part from the British Monarchy has gained public opinion.

The Parliamentary System of Canada:

Royal Backgrounds and Republican Debates in :

Since federation in 1901, Australia has maintained a strong and stable political system with a bicameral parliamentary democracy and the Queen of Australia (currently Queen Elizabeth II) as the constitutional monarch and the Governor-General representing the Queen as head of state. The majority of the slightly over 21.7 million population is spread around the main cities of Sydney, Melbourne, Brisbane, Perth, Adelaide, and Darwin and the capital city of Canberra, located in the ACT.

Australia is a prosperous multicultural country with its fair share of migrants coming from all over the world. The country has always done extremely well in achieving excellent results in the many international comparisons of standards of living such as in healthcare, public education and the protection of civil rights. Australia is a member of the world’s leading organizations such as the United Nations, G-20 group of major economies, the Commonwealth of Nations, ANZUS, APEC, OECD, and the WTO.

Senator Bob Brown puts forward a motion to the Senate that Australians vote a simple yes or no to a republic (2008):

Canada shares the same monarch with 15 other monarchies in the 54-member Commonwealth of Nations, a grouping known informally as the Commonwealth realms. The emergence of this arrangement paralleled the evolution of Canadian nationalism following the end of the First World War and culminated in the passage of the Statute of Westminster in 1931. Since then, the pan-national Crown has had both a shared and separate character, and the sovereign’s role as monarch of Canada has been distinct to his or her position as monarch of the United Kingdom, as reflected in the monarch’s unique Canadian title.
The monarchy thus ceased to be an exclusively British institution, and in Canada became a Canadian establishment, though it is still often denoted as “British” in both legal and common language, for reasons historical, political, and of convenience.

Effective with the Constitution Act, 1982, no British or other realm government can advise the sovereign on any matters pertinent to Canada, meaning that on all matters of the Canadian state, the monarch is advised solely by Canadian federal Ministers of the Crown. As the monarch lives predominantly outside of Canada, one of the most important of these state duties carried out on the advice of the Canadian Prime Minister is the appointment of the federal viceroy, who is titled as Governor General, and performs most of the Queen’s domestic duties in her absence.

The sovereign similarly only draws from Canadian coffers for support in the performance of her duties when in Canada or acting as Queen of Canada abroad; Canadians do not pay any money to the Queen or any other member of the Royal Family, either towards personal income or to support royal residences outside of Canada. Normally, tax dollars pay only for the costs associated with the Governor General and ten Lieutenant Governors as instruments of the Queen’s authority, including travel, security, residences, offices, ceremonies, and the like.In the absence of official reports on the full cost of the monarchy, the Monarchist League of Canada regularly issues a survey based on various federal and provincial budgets, expenditures, and estimates; the 2009 edition found that the institution cost Canadians roughly $50 million in 2008. More Here

Canadian debate on the monarchy between JJ MacCullough ( Citizens for a Republic) From Vancouver, Canada and From London Hafal Neydal Mankoo ( Monarchist League of Canada):

Canadian Monarchy: A short look at the Canadian monarchy, from the time of Queen Victoria to Queen Elizabeth II: