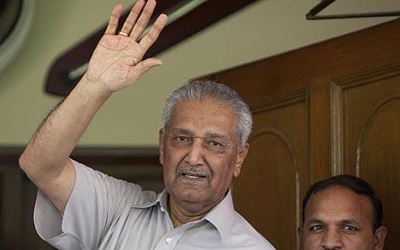 The father of Pakistan’s nuclear weapons program has written an official account that details an Iranian attempt to buy atomic bombs from Pakistan at the end of the 1980s.

Bombmaker Abdul Qadeer Khan states in documents obtained by The Washington Post that in lieu of weapons, Pakistan gave Iran bomb-related drawings, parts for centrifuges to purify uranium and a secret worldwide list of suppliers. Iran’s centrifuges, which are viewed as building blocks for a nuclear arsenal, are largely based on models and designs obtained from Pakistan.

Khan’s narrative calls into question Iran’s long-standing stance that it has not sought nuclear arms. Iranian President Mahmoud Ahmadinejad said last month that “we won’t do that because we don’t believe in having them.”

Pakistan has never disclosed Khan’s written account. A summary of interrogations of Khan and four others in 2004, conducted by Pakistan’s intelligence service and later provided to U.S. and allied intelligence officials, omitted mention of the attempt to buy a nuclear bomb. But Pakistan’s former top military official in 2006 publicly hinted at it.

In interviews, two military officers whom Khan links to the bargaining with Iran denied that finished nuclear weapons were ever on the table. Spokesmen for Iran’s mission to the United Nations and the Pakistani Embassy in Washington did not respond to requests to comment.

However, a top Pakistani government official at the time said Ali Shamkhani, the senior Iranian military officer named by Khan, came to Islamabad, Pakistan, seeking help on nuclear weapons. The former official also said Khan, acting with the knowledge of other top officials, then accelerated a secret stream of aid.

The U.S. ambassador to Pakistan at the time, Robert Oakley, separately said in an interview that he thinks Pakistan’s top military officer urged and approved Khan’s bomb-related assistance to Iran.

Who directed the deal?

Khan is a controversial figure, and he has complained bitterly about long-standing restrictions on his movements by Pakistan’s government, which says it seeks to ensure he does not restart his nuclear dealings. Several U.S. experts have noted that as a result, Khan is eager to depict others as more culpable than he was in those dealings.

Most observers now think Khan’s work for Iran was directed by “senior elements of Pakistan’s military, if not by its political leaders,” said Leonard S. Spector, director of the James Martin Center for Nonproliferation Studies. “Khan is clearly out to vindicate his reputation, but the issues remain murky enough that you can’t be certain when he is telling the truth and when he is embellishing.”

Khan’s 11-page narrative, prepared in 2004 during his initial house arrest, states that “at no time did I seriously believe that they [Iranians] were capable of mastering the technology.” But Western intelligence officials say his assistance was meaningful and trace its roots to a deal reached in 1987.

Pakistan has said little about that deal. Iran later told international inspectors that a Pakistani “network” in 1987 offered a host of centrifuge-related specifications and equipment, and turned over a document detailing how to shape enriched uranium for use in a bomb.

Pakistan’s intelligence service sought to explain the cooperation partly by noting that “due to religious and ideological affinity, Pakistanis had great affection for Iran.” But Khan also cited Iran’s promise of financial aid, as well as the government’s ambition of forever thwarting Western pressure on both countries.

“It was a deal worth almost $10 billion that had been offered by Iran,” Khan wrote.

Khan’s account and related documents were shared with The Post by former British journalist Simon Henderson, now a senior fellow at the Washington Institute for Near East Policy. The Post had no direct contact with Khan, but it independently verified that he wrote the documents.

The intelligence service’s summary said Gen. Mirza Aslam Beg, a former army chief of staff who was arguably Pakistan’s most influential figure, was “in favour of very close cooperation [with Iran] in the nuclear field in lieu of financial assistance promised to him toward Pakistan’s defense budget.”

Khan’s written statement to Henderson states that after Shamkhani’s arrival in Islamabad on a government plane, he told the chairman of Pakistan’s Joint Chiefs of Staff committee that “he had come . . . to collect the promised nuclear bombs.”

When the chairman, Adm. Iftikhar Ahmed Sirohey, proposed to discuss other matters first and then “see how Pakistan could assist the Iranians in their nuclear program,” Shamkhani reportedly became irate, Khan wrote. He reminded Sirohey that “first Gen. Zia [ul Haq, the Pakistani president until 1988] and then Gen. Beg had promised assistance and nuclear weapons and he had specifically come to collect the same.”

Such a transfer was theoretically feasible. Although Pakistan exploded no nuclear bombs until 1998, the U.S. intelligence community concluded it had the capability to make weapons by 1986.

Shamkhani, a founding leader of Iran’s Revolutionary Guard Corps, was long active in the country’s nuclear program, according to U.S. officials. A longtime defense minister and presidential candidate in 2001, he now runs a Tehran think tank. The Iranian mission in New York did not respond to questions about him.

Khan said that after hearing Shamkhani’s demand for three finished weapons, Sirohey demurred and that other ministers backed him up. But Beg pressed then-Prime Minister Benazir Bhutto and her top military aide “to honour [Beg’s] . . . commitment,” Khan wrote.

Under pressure, the aide asked Khan to “get components of two old (P-1) discarded machines and pack them into boxes with 2 sets of drawings,” which were passed to Iran through an intermediary, he said. P-1 is the designation for the centrifuge model used in Pakistan.

Asked to comment, Sirohey said he did not recall the meeting “or ever hearing about a deal to sell nuclear weapons to Iran.”

In an interview, Beg denied bartering nuclear weapons for cash. He said that when an Iranian delegation “asked me about nuclear technology” in 1988, he advised discussing it with Bhutto.

A 2006 Associated Press article reported Beg’s recollection of a 1990 visit by an Iranian delegation: “They asked, ‘Can we have a bomb?’ My answer was: By all means you can have it but you must make it yourself.” But on a Pakistani television program in June, Beg said he has “always” urged the transfer of nuclear arms to Iran.

The former Pakistani official said, “Shamkhani thought he had a deal when he came to Pakistan.” Various top officials, the former official said, were aware that Beg told the Iranians, “You have the money, we have the technology. Beg saw this as a win-win . . . a way to take care of the Army’s endless budget problems.”

In his narrative, Khan states that his next direct contact with Iranian officials was at a meeting in 1994 or 1995, when some Iranian scientists complained about their lack of progress.

Khan said in a note to Henderson that he subsequently agreed to send centrifuge parts to Iran. The IAEA says Iran admitted that Khan’s network in 1996 also turned over the design for a more advanced centrifuge that Pakistan had constructed, known as P-2.

Malaysian police reported in 2004 — based on interrogations of a Khan associate — that the parts were shipped aboard an Iranian-owned ship after first passing through Dubai. In return, the associates were paid $3 million.

The Pakistani intelligence service report differs slightly: It said Iran paid $5 million for drawings of equipment used in enriching uranium. Some funds were deposited in a Dubai bank account controlled by Khan and two associates under the name “Haider Zaman,” the report said. Khan used that name in a government-issued passport to conceal some foreign travel.

Khan has told Henderson that the funds went to associates and that he never retained any, which some U.S. officials consider implausible. Khan also said in a separate note that he supplied “the names and addresses of suppliers” to the Iranians. Western officials say that act could have given Tehran access to companies that possessed drawings of Pakistani bomb parts and to components of the more advanced P-2 centrifuges used by Pakistan.

Iran last month promised to install such advanced centrifuges, which it calls IR-2s, at two sites this year.