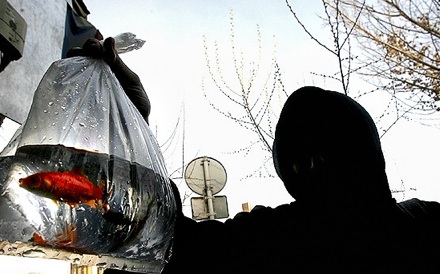 Chahārshanbe-Sūri (Wednesday feast) is an ancient Persian festival whose origins lie in the Achaemenid era of Persia’s civilisation (549-330 bce) and its successors, when Zoroastrian beliefs were strong. By tradition it is celebrated on the last Wednesday night before nowrooz (Iran’s new year) in mid-March. It is a jubilant collective moment for Iranians in the country and among diaspora communities cross the world. In Iran itself, people gather in streets and back-alleys to make bonfires and (in the case of the younger and more adventurous) jump over them; set off firecrackers; play music, dance and sing; and to enjoy special foods and the joys of conviviality. In the life-affirming Chahārshanbe-Sūri, modern Iranians each year take the fire that was at the heart of the Zoroastrians’ sense of their world and their collective self-definition, and make it the centrepiece of their own modern ritual.

This year, the approach to the Chahārshanbe-Sūri – which fell on 16 March 2010 – was of a different character to any in the country’s history. Iran’s doctrinal regime politicised the ritual and made it an object of official fear. A campaign to discourage people from joining the celebrations began when the head of the national police-chief warned parents to prevent their children from going out, and continued with plans by the state-run television to show popular movies to keep youngsters indoors. Then, the authorities deployed security forces (including basij militias armed with guns and batons) in the streets and around the strategic locations of Iran’s major cities. The campaign culminated in the issuing by Iran’s supreme leader Ayatollah Ali Khamenei of an unprecedented fatwa that castigated the ritual as both “irrational” and in Islamic terms “illegitimate” (gheir shar‘i).

It didn’t work. As ever, millions of Iranians poured into their neighbourhoods to observe the national “calendar custom”. Many of them responded to the state’s politicisation of Chahārshanbe-Sūri by using the occasion to express their own defiance of the clerical regime, chanting slogans and songs of resistance. In Tehran, fifty people were arrested after clashing with the police and basij vigilantes.

Why does the Islamist regime express so much paranoia over Iran’s great annual festival with deep roots in the country’s history? The immediate answer would refer to the political context: in particular, the eruption of popular protest against the fraudulent presidential election of 12 June 2009, when Iranians poured onto the streets in a defiant affirmation of justice that only the most ferocious repression could subdue (see Farhang Jahanpour, “ Iran’s stolen election, and what comes next”, 18 June 2009). In these circumstances, the regime’s attitude can be seen as inspired by fear that any occasion when Iranians gather in numbers is now an opportunity for the opposition “green movement” to mobilise popular anger and demonstrate how hollow is the regime’s legitimacy (see “ Iran: a green wave for life and liberty”, 7 July 2009).

The Islamic Republic’s deepening fear of the people since mid-2009 is a plausible explanation for its animosity towards the joys of Chahārshanbe-Sūri. But if the first nowrooz since the election has provoked this stringent campaign, the suspicion of puritan Islamists towards any public expression of human pleasure has been evident since the foundation of the regime in 1979. Any occasion of festivity and spontaneous life – informal gatherings at street-corners, concerts and sporting contests, student parties and even bustling shopping-malls – is regarded by Islamist zealots with profound disdain. In this context, Khamenei’s fatwa seeks to give a new doctrinal form to this larger paradigm of disparagement.

The zealots’ opposition even reaches into private and individual expressions of festivity. The many videos posted by Iranians of their Chahārshanbe-Sūri celebrations (and protests) onto the web includes a shocking basij attack on a late-night indoor private party in a Tehran neighbourhood on 16 March 2010. It shows the thugs dragging a screaming woman, accompanied by a child, into custody – spreading terror among everyday citizens doing what people in normal countries do and take for granted across the world: having fun.

In its attitude to everyday enjoyment, the Iranian regime has – for all the political differences – much in common with fellow-Islamist states or movements such as Saudi Arabia and the Taliban in Afghanistan. There may be variations in what is regarded as “un-Islamic” (television, dance and even kite-flying in the latter case), but the mindset is the same.

The fear of enjoyment is a singular feature of these Islamist states and movements, whose dogmatic models are unable to accommodate – and so are compelled to reject and seek to deligitimise – expressive behaviours that are at the heart of human life: even including playfulness, laughter, and displays of fashion. These power-driven forces seek to reinforce their case by depicting such behaviours as as part of a “western cultural invasion” (see Life as Politics: How Ordinary People Change the Middle East [Stanford University Press, 2010]).

Here, the systemic intolerance towards so much that constitutes the human also reveals its inner weakness in face of its innocent enemy. To suppress fun in everyday life – including on festive and ritual occasions – is also to politicise it. The doctrinal compulsion to control turns the everyday into a site of struggle and defiance; such that each explosion of a firecracker in what would otherwise be a routine festival becomes a thunderous affirmation to the highest power: “I do not want you”.