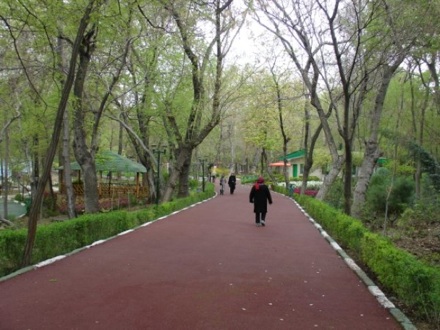 Sorry folks, no Green revolutions on Charshanbeh Souri or Eid, no revolts, mayhem or bloodshed in the streets of Tehran, unpack your luggage.

Iran was the same Iran that it has always been during Eid. The typical beautiful Noroozi spirit with the aromatic spring air, flowers everywhere and happiness reflected on people and freshness on the roads, mountains, and the parks… everywhere was fresh and beautiful! Anticipation of Norooz, vacation, fun, and family visits made people crowd the Shirini foroushis, gol foroushis, ajil foroushis, mahi foroushis… life was fluid all over Tehran. The difference between setting your haft sin in Iran and setting it here reminds me of the difference between decorating a Christmas tree in Boston with snow all around you vs. the fake Florida Christmas decoration 🙂

Here are some photos hoping to transport part of the authentic Eid spirit. Tehran is celebrating Norooz of 1389 – where the New Year’s slogan is “Hemmat Mozaaf – Kaar Mozaaf” as seen on banners along the streets.

The first picture is few days before Eid and is in Massachusetts, the geese are trying to find parts of the water where ice has melted, and they usher the coming of spring by doing their favorite thing: upending and showcasing their pretty white butts. That picture is partially meant for Ari who likes geese behavioral analysis.

There are pictures of pre-Eid shopping in Tehran where some sellers were making jokes by shouting: “toop – tank – feshfesheh… sinereh poonsad toman!”

I will include some pictures of Haft Sin, Norooz flowers and shirini, Gheytariyeh park where old and young are busy with many sport machines along the pathways in the park, youth are mostly busy with the new fashion of the day (and night) – Badminton – and I personally like the park because I love ping pong and that park has many ping pong tables and many good regular players. There, one gets to watch good players and play with random unknown people and have a park tournament! Many people were also playing takhteh nard, rami, and chess in the park. There is one accepted park champ for takhteh nard it seems. There are nice tables and gazebos designated for the games in the park. Finally, for me, it was the first time to hear loud speakers in the park play beautiful Noroozi music.

The pretty highway pictures are along bozorgrah Hemmat and Moddares and those highways get prettier by the year as the trees grow! I found it ironic that some smoker friends were buying the cigarettes which have the picture of “marg v zendegi” and because of that picture are few hundred tooman cheaper than the same cigarettes without the pictures, and they were feeling good about fooling the manufacturers by not caring about the pictures >>> Photos